Skip to content
The story so far: I co-founded the Internet Movie Database and accepted the award at the inaugural Webby Awards ceremony in 1997.

In 1998, the Webby Awards were held at the Exploratorium and we were nominated again. Andrea and I were joined by another IMDb teammate, Jon, who ventured north from L.A. for the show, which was bigger and swankier than the year before. We got “Nominee” t-shirts! And we won again. This time I was ready with a five-word acceptance speech: “You ain’t seen nothin’ yet!” (Ironically, it’s a movie misquote.)

Soon after that, the IMDb was acquired by Amazon.com. Over the next couple of years, as Amazon’s stock price enjoyed its celebrated rocket ride, I joined the happy (but in the words of Beaker, “sadly temporary”) ranks of instant dot-com millionaires.

In 1999, the IMDb team leader, Col, came from England with his wife Karen for the biggest and swankiest Webby Awards yet, held at the Herbst Theater in San Francisco, with a gala reception afterward in the newly renovated City Hall complex in San Francisco. It was the “year of money” — the height of the dot-com boom — and the show was produced on a scale to rival the Academy Awards. (Something should have tipped us off that it was all transitory — for instance, the fact that the screaming groupies who greeted the arriving nominees as we strode along the red carpet were hired ringers.)

The IMDb won yet again for best film site — the only web site to three-peat at the Webbies! Col, Karen, Andrea, and I ran up on stage. Col’s five-word acceptance speech was, “I’m king of the World-Wide-Web!” Later, Amazon.com won for best commerce site; Col accepted that one too. At the very ritzy reception he insisted on carrying both trophies plus the one from the year before — I’d brought it for him to take home — which made a bulky but impressive display and brought us all plenty of attention.

Around that time, I also happened to be on an extended consulting contract with Amazon on behalf of my own e-mail startup, Zanshin. For several weeks I flew to Seattle each Sunday night and returned home on Friday. The contract was going so well that Amazon had made an offer to hire the whole company and relocate us to Seattle. (We ultimately turned down that offer, but only after considering it for a long while.)

It was agreed that I would bring the new IMDb and Amazon trophies to Seattle on my next trip and deliver them to Amazon founder Jeff Bezos. Here’s the e-mail message I sent to some folks right after I completed that errand. Just a few weeks later he was on the cover of Time magazine as the 1999 Man of the Year.

I just returned from my audience with Good King Bezos, where I dropped off Amazon.com’s two Webby trophies.

He was busy talking with a secretary when the time for my appointment arrived, but as soon as I poked my head into his office (he has no personal receptionist), he leaped out from behind his desk with his hand extended. I took it and shook.

He told me how amused he was by the comment in my e-mail requesting the meeting, where I said that I may become the first person to be acquired by Amazon twice. He asked whether I was now an employee, then noticed my green “contractor” badge. I very briefly explained the whole history to him, at some points causing him to blurt out his trademark boisterous, surprisingly loud laugh.

I unwrapped the trophies and said what a shame it was he didn’t go to the ceremony, but that if he had, his would have been the only recognizable face. Boisterous laugh. We spoke a bit about Col and what a press magnet he was while carrying around three trophies after the awards ceremony (boisterous laugh), and I told him about the female reporters’ flashing eyes (boisterous laugh) and the woman who commented, “You have three penises!” (Extremely boisterous laugh with backward stumble and doubling over.)

He admired the attractive trophies, likening their design to DNA, and I pointed out that they’re each a single helix, so they’re more like RNA. This elicited another laugh, and I found myself thinking that [another CEO I knew] wouldn’t even get it if I said that to him, let alone find it funny.

He thanked me for helping to create and maintain the IMDb, and I thanked him for acquiring us. I said that between that, my book (which appears in Amazon’s catalog), the consulting gig, and the job offers, Amazon appears to have moved to the center of my universe in a surprisingly short time. Very boisterous laugh!

He then asked in all seriousness how he could help us reach a decision about accepting the job offers, and I told him very frankly that location is a big obstacle.

He said that he himself always liked making big moves, going back to when he was in elementary school, where he was not a nice kid. He believed he was smarter than everyone else and he frequently told them so. Everyone thought he was a jerk, so a major move always meant another chance “not to be a jerk this time.”

We thanked and congratulated each other again, shook hands, said what a pleasure it had been for each of us to meet the other, and then I left and he got back to work.

After getting back to my office, I looked in the mirror: distant gaze, beatific smile, (some) white hair — just like Charlton Heston coming down from the burning bush. Is Jeff B.’s personality that powerful? Or was I just really happy about the pizza I ate for lunch?

It’s Fleet Week in San Francisco. Each year, several Navy ships steam into the Bay through the Golden Gate, dock at berths throughout the city, and open for public tours. The highlight of Fleet Week, for me and many others, is the air show featuring the Blue Angels. I have no great love for the military-industrial complex, but to deny the visceral thrill as a formation of fighters tears across the sky barely fifty yards overhead at hundreds of miles per hour, the roar of their engines nearly liquefying your viscera (making it literally a visceral thrill, unlike most other things), would be to renounce my guyhood utterly. Sorry, Birkenstocks-and-granola crowd: you are my brothers, but that is a line I will not cross.

Here in the Bay Area, we’ve had the first rain of the season on and off all week. But the forecast for the weekend is clear and sunny. Of course it is. I’ve lived in the Bay Area for fourteen years now and I’ve never once seen it foggy or rainy for the Blue Angels’ performance. This in a city that is foggy almost all summer and drizzly almost all winter. What are the odds?

When you consider that the Bay Area is also a hotbed of liberalism and dissent, it strongly suggests that the government is deliberately keeping San Francisco cloudy and gray with its secret weather-control satellite, which it conveniently switches to “sunny” when its propagandistic stunt-flying team comes to town. Most San Franciscans don’t even realize they’re being trained to equate happy warm feelings with the presence of the U.S. military…

We took a last-minute trip to San Diego this weekend to spend a day at Legoland. Our hotel in Carlsbad, the Grand Pacific Palisades Resort, was beautiful, the kids had a blast at Legoland, etc., etc. I’m not here to show you slides from my vacation.

No, the blogworthy item from this trip was when we first arrived in our hotel room. Before we’d even made a complete circuit of the spacious suite, Jonah found the TV remote control, figured out how to use it, switched on the TV and planted himself on the couch in front of it.

At home, Andrea and I maintain total control over the TV, so having operational access was a major novelty for Jonah. But even more novel was the experience of watching TV with channels and commercials. Ever since dropping off the pop-culture grid all we’ve seen are carefully selected movies and other child-friendly programming (such as The Electric Company) on DVD. Even before canceling cable, we watched cable shows on TiVo with commercials assiduously skipped.

Thus Jonah’s comment when I explained how to change channels with the remote: “But where is the disc?” And the dumbfounded look on both kids’ faces when, every so often after a few minutes of a coherent story, they would suddenly be assaulted with an unrelated barrage of sights and sounds. As Archer would have said (if he hadn’t been in a mute ecstasy of audiovisual overstimulation at the time), “What’s the heck of that?!”

At the dentist this morning, where I received an otherwise clean bill of dental health, I learned that one of my old fillings is cracked and will have to be replaced. While discussing it with the hygienist, the dentist asked if it was “amalgam or composite?”

An amalgam is a mixture of substances. So is a composite. So really the dentist was asking, “Mixture or mixture?”

Incidentally, my dentist is the one whose office sounds were recorded by the folks at Pixar for the movie Finding Nemo. 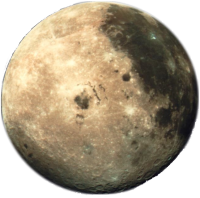 I subscribe to Yahoo!’s Ask Yahoo! daily e-mail newsletter. Yesterday’s question was, “Does our moon have a name other than ‘the moon’?” In short the answer is no.

We like the moon, and we like to name things we like, such as my kids, Jonah and Archer, and my car, the Nimble Imp. So let’s name the moon. And let’s give it a name that will stand the test of time. In thirty thousand years, when spacefaring humans rediscover a long-abandoned Earth, they’ll hardly be inclined to call our moon “the moon”; it’ll be just one of millions they will have catalogued. If we don’t want our distant descendants calling it something like “SZCG-78513/12,” it’s up to us to give it a memorable name that will survive into editions of the future Encyclopedia Galactica.

While we’re at it, might as well name our sun (“Sol” never did it for me) and our solar system. Here are my slightly overblown suggestions: