Skip to content
The new Battlestar Galactica, recently concluded, was a terrific show — a consistently gripping drama first, a science-fiction adventure (distantly) second. For four years it delivered countless memorable moments and performances; it caused us to mull deep questions; and it left us unable to wait for each new episode.

Last week the final episode of the series aired amid promises that the story’s mysteries and loose ends would be resolved; but that isn’t precisely what happened. For the finale, the show took a sharp turn from gripping to baffling.

As ever, the character aspect of the show was front and center for the final episode, but unlike the four years that preceded it, this time it came at the expense of the plot. Here’s what I wrote about it in an e-mail exchange with my friend Maggie:

Long ago on Usenet, the awesome Internet film critic Mark Leeper wrote, about Bonfire of the Vanities,

…a comedy that ends with some dignified character summing up the film and making a sermon for more “decency” at the end has a hard time being all good either. In the 1950s and 1960s a Spencer Tracy or perhaps a Henry Fonda could sermonize and it would work. Here it is like getting to the bottom of an ice cream sundae and finding a chunk of prime rib.

I had the reverse sensation on seeing the end of BSG. It was like enjoying a really juicy steak for four years and discovering, only after popping it in your mouth, that the last bite — the one you wanted most to savor — is made of cotton candy.

Her reaction was stronger, she replied; she felt betrayed. So I composed the reply that follows — which will make sense only if you’ve seen the series, and of course it includes spoilers.

END_OF_DOCUMENT_TOKEN_TO_BE_REPLACED

Archer’s fifth birthday is coming up and it’s time again for a clever birthday party invitation.

Archer has a sunny personality and a very distinctive smile, and so the theme for this year’s party is smiles! For his invitation we printed out life-sized pictures of his smiling face, cut out eye holes, pasted a stick at the bottom to make it into a mask, and affixed a message to the reverse with the invitation details and saying, “Put on a happy face!” 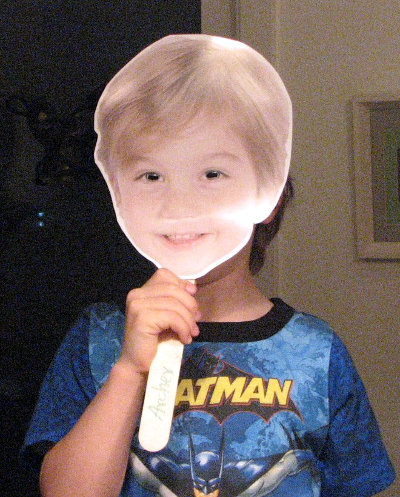 Yesterday I received a link — buried at the end of a long chain of e-mail forwards all saying variants of, “Wow, this is scary!” — to a video that depicted groups of people using stray microwaves from their cell phones to cause popcorn kernels to pop.

In the video, three or four phones are placed on a table in a ring around a few popcorn kernels, and then someone dials each of the phones to cause them to ring. Within a couple of seconds the kernels start to pop.

The sender who forwarded it to me asked if I knew whether this was for real.

My reply asked the sender to consider the power available to a cell phone versus the power available to a microwave oven. A microwave oven draws 15 amps of current from the household mains, producing hundreds of watts of focused microwave energy with the specific purpose of heating up food placed in the target area — and even so, it takes at least 30 seconds of exposure for the first kernel to pop. A cell phone, by contrast, houses a battery rated in milliamp-hours, with a typical one holding 1500 milliamp-hours of energy. This means it can draw 1 milliamp for 1500 hours, or 1500 milliamps (1.5 amps) for one hour, and so on. If a cell phone tried to draw 15 amps from such a battery, then (apart from the phone melting) the battery would be depleted in 1/10 of an hour — six minutes. Clearly cell phones do not draw 15 amps, but even if they did, they wouldn’t convert nearly as much of that energy into microwaves as microwave ovens do; and even if they did that, the microwave energy wouldn’t be focused the way it is in a microwave oven. Yet the video depicts the first kernel popping within about three seconds.

If that much microwave energy really were reaching the popcorn kernels, we’d also be seeing the other effects of powerful microwaves on objects in the immediate vicinity. For example, we’d see sparks and electrical arcing from metal objects, including the cell phones themselves. But we don’t.

Finally, why would a ringing cell phone cause popcorn to pop? To ring, a cell phone merely has to receive an “incoming-call” signal from a cell tower. The phone doesn’t begin transmitting any appreciable amount of power until after you answer it and begin speaking!

At this writing, the video in question has a supposed 11,031,929 views. When I think of all the people across the Internet who are now arranging their cell phones in rings around a handful of popcorn kernels, I despair.

Many nights at lights-out, my kids will ask me to tell them a story. Sometimes I relate a bit of science or history; sometimes it’s something autobiographical; and sometimes I just make up a story they’ll like.

Last night I was too sleepy to do any of those, but they asked, so I started giving my usual cop-out spiel:

“Once upon a time, there were two boys, Jonah and Archer, who were so sleepy that they snuggled under their blankets…”

so I said, “Once upon a time, there was a dad who was so sleepy…”

so I said, “Once upon a time, there was a grandpa who lived far away…”

but Archer said, “No! No Glicksteins! Tell a superhero story!”

So I thought a moment and said, “Once upon a time, Batman wanted some ice cream.”

Archer, knowing my pacifist tendencies in storytelling, said, “No, with fighting!”

So I said, “Hold your horses. How do you know there’s not going to be fighting in this story?” I continued, “Batman went to the ice cream store and said” — and here I put on my best iron-willed, tortured, costumed-vigilante voice — “‘One scoop of chocolate, please.’ The man behind the counter said, ‘I’m sorry, Batman, but we’re out of chocolate.’ So… Batman fought with the man behind the counter!”

I said, “You’re right. OK: once upon a time, Batman wanted some ice cream. So he went to the ice cream store and said, ‘One scoop of chocolate, please.’ But the man behind the counter said, ‘I’m sorry, Batman, but I just sold the last scoop of chocolate to Spider-Man over there.’ So… Batman fought with Spider-Man!”

At this point, Jonah, who’d been listening in quiet amusement, chimed in, “But Batman is DC and Spider-Man is Marvel!” Which impressed the hell out of me.

So I said, “You’re right! So there could never be a Batman/Spider-Man crossover, could there? OK… Once upon a time, Spider-Man wanted some ice cream. So he went to the ice cream store and said, ‘One scoop of chocolate, please. No, wait: vanilla. Oh hold on: strawberry. No, rocky road!’ The man behind the counter started to get impatient. ‘Please make your selection, sir,’ he said. So Spider-Man said, ‘I really want cookies and cream. Wait, I mean pralines and cream! Ooh, maybe I should get some sherbet instead. Lemon — no, orange! Wait, rainbow! Eh… maybe I should stick with chocolate…’ Now the man behind the counter wasn’t just impatient, he was angry. His skin turned green, and he got really big and burst out of his shirt — he was the Incredible Hulk! And he fought with Spider-Man.”

Archer: “They wouldn’t fight. They’re both good guys! They’re on the same team!”

Me: “Maybe it wasn’t really Spider-Man. Maybe it was one of those bad guys who can make himself look like someone else.”

Honestly, it’s a wonder those kids ever get to sleep.

Over dinner the other night, Andrea and I were gushing to our kids about how wonderful they are. “We’re so proud of you guys,” we told them. “You’re smart, you’re funny, you’re polite, you’re thoughtful. We’re very lucky to have two such wonderful boys.” They seemed indifferent to our praise, so, curious to know how and whether they valued their own attributes, I turned first to Archer and asked, “What’s your favorite thing about yourself?”

It took him just a beat to answer definitively, “My wiener.”

Hey, he’s only saying what the rest of us are thinking.