How can we get back to a good economy if doing so requires confidence that the bad economy is preventing us from having? You may not be surprised to hear that I have a modest suggestion: lie.

The economy has been so bad for so long that public confidence in a recovery is low — half of what it was in (the economically unremarkable benchmark year) 1985. Without confidence in the economy, households have pared expenditures to the essentials, companies are delaying hiring and putting off investment in new lines of business, and banks are doing the bank equivalent of hiding their money under the mattress — all of which makes the economy bad, which produces low confidence, which makes the economy bad, etc., etc.

You may not be surprised to hear that I have a modest suggestion: lie. I wrote once before that pretend confidence can lead to real confidence, and I don’t see why this situation is any different.

Starting immediately, work some offhand comments into your everyday conversation, to the effect that the economy is finally picking up steam. Mention, for instance, that you noticed a couple of long-empty office buildings have been leased, or that some unemployed Facebook friends finally found jobs just recently, or that you read somewhere that now’s the time to get that fancy new TV because sales are finally ramping up again and those big manufacturer discounts will be coming to an end. It won’t take much, because people are starving for good economic news and will devour morsels like these. And don’t worry that they’re not true. If enough of us start implementing this idea, pretty soon they will be.

Update, 8 October 2010: A week after I posted this, Planet Money ran a story about four economists who saved Brazil by — wait for it — getting everyone to lie.

It wasn’t until I happened to take my kids to the Two Niner Diner at Petaluma Airport for lunch this weekend that I realized an anniversary had almost passed by unnoticed — fifteen years, this month, since I earned my private pilot license.

Five years earlier, Andrea bought me an introductory flight lesson as a Christmas gift, knowing that I’d long dreamed of flying. As a kid growing up in Queens, I would take the bus to LaGuardia Airport to watch takeoffs and landings (in the days before the “land of the free and the home of the brave” decided it was too terrifying to allow anyone to do this and roped off all observation areas, sucking the last bits of glamor and romance out of aviation). I checked out FAA training manuals from the library and learned them. I became an expert in Microsoft Flight Simulator (which I started using in the days when it was still the subLOGIC Flight Simulator for the TRS-80).

In spite of all that, it had somehow never occurred to me to actually go and do something about learning to fly. It took Andrea giving me that certificate to get me in the air. So one cold day in January 1991 I drove to Phoenix Aviation (issuer of the gift certificate) at Allegheny County airport, and a flight instructor named Jay Domenico took me aloft in N6575Q, a bright yellow Cessna 152, and handed me the controls.

I was hooked, and I continued flight training at Phoenix with Jay. But between my meager finances, my job workload, and the unreliable weather around Pittsburgh, I didn’t train often enough to earn my license during the next two years, following which I moved to California to join a tiny software startup. The weather there was a lot more conducive to flying, but as often happens to those who commit themselves to tiny software startups, my available time and money dwindled to almost nothing.

By 1994 that situation had improved. I celebrated a successful major software release with a resumption of my flight training, and by September of the following year I’d passed my checkride and earned my license — just as enormously satisfying an accomplishment as you can imagine. 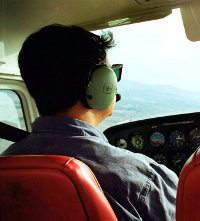 Circa 1998, ferrying friends Rob and Holly
to a so-called $100 hamburger
in Columbia, California.

I used my license on only a handful of occasions over the next few years, renting a plane from my local flying club for a day trip, sometimes solo, sometimes with one or two friends or family members. No trip was longer than a couple of hours; each was memorable in a different way. A few highlights:

Private pilots must undergo so-called biennial flight reviews (at two-year intervals, hence “biennial”) to maintain the validity of their licenses; it’s sort of like having to take your driving test again and again if you want to keep driving (which wouldn’t be a terrible idea, if you ask me). Having earned my license in September of 1995, and having renewed my BFR promptly every other September after that, I had a BFR due in September of 2001. A few days before my appointment, some murderous idiots hijacked some jetliners and flew them into some landmarks, and all aircraft nationwide were grounded for a period of days. My BFR was canceled. When the opportunity arose to reschedule it, I didn’t — because by this point, Andrea and I were expecting our first child. I never thought of flying as an especially dangerous hobby, but it’s certainly more dangerous than not flying, and the prospect of new-parenthood was enough to ground me, at least temporarily.

That spring, Jonah was born, and two years later so was his brother Archer. It had been three years since I’d flown and I was missing it terribly. Worse, I knew that my flying knowledge and skills were decaying, and that it would take several hours of refresher instruction before I felt comfortable flying again by myself. With two young kids, a new job, and a new house, that simply wasn’t in the time or money budget, but I consoled myself with this plan: I would keep my flying ability secret from my kids, and then one day, when they were old enough to be properly impressed — around 8 and 6, I figured — I’d spring it on them, taking them to the airport and surprising them with a flight over the local area, their dad at the controls. By then I would surely have worked some refresher training into the budget.

Well, the kids are now 8 and 6 and there is still no flying in the foreseeable future. But they still don’t know their dad’s a pilot, and they still don’t read this blog, so the possibility still exists — though maybe not for long — that I can blow their minds someday.

When I was a programming intern at the very start of my career, circa 1987, our tech writer had this sign above her workstation:
Before asking me a question
RTFM
Read the manual

No one had ever heard “RTFM” before, and this formulation was funny because (at the risk of stating the obvious) it omitted the F from the expansion of the acronym. Here’s what’s funny about that: you effortlessly fill in that blank yourself, and you recognize that everyone else can too, which highlights the frivolity of that bit of prudery; and at the same time you recognize the hostility of someone who’s been asked too many dumb questions, ill concealed in a sign made ostensibly polite by the omission of what the F stands for.

“RTFM” became widespread not long after that, but every single subsequent time I saw it — on t-shirts and coffee mugs, on demotivational office posters and in e-mail signatures — and every time someone wittily quoted it to me, it was always “Read the fucking manual,” which completely misses the point. There’s no frivolous prudery on display, no conspicuously bad attempt to conceal the hostility of the sentiment. RTFM had become just an abbreviation for a crude message and a tiny bit of something important was lost from the world.

Here’s another thing: a few years after that first RTFM sign, in 1990, the movie Goodfellas came out, and there was a brief flurry of discussion on Usenet surrounding the effort made by one dedicated moviegoer to count the number of times the word “fuck” is used in the film: 296, raising Goodfellas head and shoulders above former champ Scarface (from 1983, with 207 occurrences of that word).

“Fuck” still had the ability to shock and surprise, as evidenced by the astonished reactions on Usenet to its profligate use in Goodfellas, but thanks to that film and Casino (1995: 422 “fucks”) and their ilk, that power was waning. Soon a torrent of “fucks” would be used for comic effect in The Big Lebowski (1998: 260) and then we had The Sopranos (1999), every episode of which was 20% “fuck” by weight.

The power of “fuck” is almost all gone, and that’s a shame, because what can take its place as the all-purpose strong taboo epithet? By overuse it’s been demoted to a very mild intensifier, as in “You cannot fucking believe the fucking paella at this fucking place, it’s fucking amazing.” Texters use LMFAO and OMFG without a second thought (and without pretending they stand for “laugh my ass off” and “oh my god”), and a little more of something important is lost from the world.