Skip to content
One Internet craze from the early days of the World Wide Web was to compose haiku about Spam (the lunchmeat, not the unwanted e-mail). My friend Eric Pivnik wrote the best possible one of all time:

Pink tender morsel
Glistening with salty gel.
What the hell is it?

His efforts inspired some of our coworkers in the mid 1990’s to write their own. Here’s mine:

Pink ingot of meat
Bit by bit it goes in me
Now I am Spam too.

Not long after that I challenged everyone to write double dactyls, a very specific comic-rhyme form with several rules:

I started it off with this one.

Her secret fantasy:
Selling her photographs
Capitalistically
Paying the rent.

David Hartmann came back with this terrific one:

“Picture yourself in a
Boat on a river” gets
Beatlemaniacally
Stuck in my head.

Christine Martinez-Begle wrote this about her husband:

which, apart from being macabre, has a few problems in its structure, so I wrote this to poke fun at her:

Probably she’s just like
Those who say “fire” is
Polysyllabical
(That includes me.)

Finally, for Salon.com’s “dot-com haiku” challenge in 2000, in addition to a few forgettable haiku (the best of which was: Start a company / Get funding. Show promise. Fail. / Start a company) I offered this double dactyl:

Hump-i-ty Dump-i-ty
Jeffrey P. Bezos’s
Company made him Time’s
Man of the Year

Tonight I finished a project I’ve been working on for years: reading all of the Harry Potter stories to my family, all seven volumes, all 4,167 pages.

Tonight I finished a project I’ve been working on for years: reading all of the Harry Potter stories to my family, all seven volumes, all 4,167 pages. Correction: I read almost all of them. Jonah took over for one chapter a little while ago when my voice was too hoarse, like Sam to my Frodo.

I am so, so happy that I prohibited the boys from seeing any of the movies before reading the books; and I feel so, so sorry for anyone who’s only ever seen the movies and thinks they know the stories. Naturally there are a lot of great scenes and there is a lot of rich detail that never made it into the movies, but that is true with any novel adapted for the screen. Also as with any adaptation, some of the changes made by the filmmakers were improvements on those unavoidable parts of the books that were not great or rich.

But the films do worse than leave out scenes and detail — they get key characters wrong. (Or at least, numbers 1 through 6 do. None of us has yet seen parts 7a or 7b.) The film Dumbledore may be a powerful wizard, but he has none of the book Dumbledore’s warmth, deep wisdom, or mischief. And Harry Potter may stir himself to heroic action on film when the need arises, but there is no sense of the fierceness of purpose to which he is so often roused in the books.

I’m sure countless Harry Potter fan sites have debated these things endlessly so I won’t belabor them, but I can’t let it go before giving one example to illustrate my complaint. Spoilers ahead.

END_OF_DOCUMENT_TOKEN_TO_BE_REPLACED

A Google image search for “Kubrick stare” turns up: 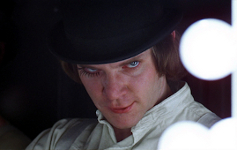 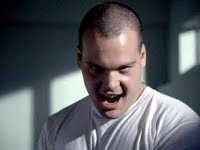 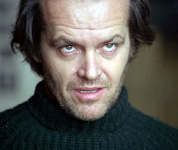 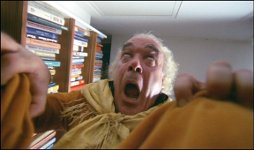 A Google image search for “Spielberg stare” turns up: 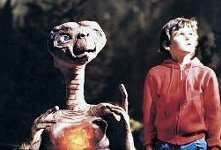 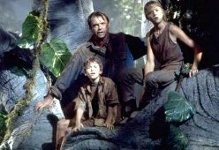