Skip to content
Next week, He Shot Cyrus will host the “My Best Post” blog-a-thon, so now I’m thinking about which of my rambling, incoherent compositions on this site are the “best” — i.e., the least rambly and the most coherent.

I’ve got a few favorites in mind, but what about you, my legions of loyal readers? I know it can’t really be When on Rome (speaking of legions), even though disappointingly that’s far and away the most popular page on this site lately, the result of hundreds and hundreds of nipple-related Google searches by individuals who somehow can’t manage to locate anything better on the Internet for their fixation than half a dozen fuzzy pixels (’cause, you know, it’s not like there’s naked girls on the Internet or anything).

If you have a favorite post on this site, please leave a comment about it below. Thanks!

Here’s what real-life heroism looks like. Watch it now.

If I caught someone trying to steal from my children I would pursue him to the ends of the earth. How is the current kleptocratic regime’s looting of my children’s country’s heritage any different? They must be stopped.

I was so impressed by Representative Kaptur’s speech that I created an ActBlue page for sending her thanks in the form of monetary contributions. I suggest a contribution of $20, which you would think nothing of spending in a week’s worth of trips to Starbucks, and what has Starbucks done lately to save the world from history’s most audacious thieves?

Several weeks ago, I made plans to travel to Pittsburgh with my family on Southwest Airlines. For various reasons we ended up having to cancel that trip. Even though we got Southwest’s lowest, web-only, nonrefundable fares, we were able to bank the entire value of the canceled tickets in a Southwest “Ticketless Travel Funds” account for later use, with no cancellation fee at all. Thanks, Southwest!

On Saturday night I went back to Southwest to apply those funds toward a family trip to Seattle that we’re now planning. When I got to the payment step on their website and tried to apply the funds, I got the message that the Ticketless Travel servers were down for routine maintenance and I should try back at such-and-such a time. When I retried, the servers were working — but the airfare had gone up!

So I called their customer service number and spoke to a friendly, helpful person who listened to the story, appeared to pull some strings — and was able to get me the lower fare even though it had nominally expired, and was nominally web-only. Thanks, Southwest!

However, for some technical reason she could not apply the Ticketless Travel funds, so I had to use my credit card to make a new airfare purchase. She suggested I try escalating to a special customer relations department during normal business hours. (This was the middle of the night on Saturday.)

Today I called the special customer relations department and spoke to another friendly, helpful person who said, “I’m sorry, I just have no way to retroactively apply Ticketless Travel funds to an already-purchased itinerary… hang on a second…” I listened to a lot of keyboard tapping and then the woman announced, “OK, I have a new reservation for you that uses your Ticketless Travel funds and I can cancel the reservation that used your credit card. Even though that wasn’t refundable I’ve arrange for a refund to your credit card anyway. Shall I proceed?”

Shall I kiss you first? In this age of persistent impotent rage at every aspect of air travel, Southwest stepped up to the customer-service plate big-time. I told them I thought so and promised to give them a shout-out on my blog, so here we are. Thanks, Southwest!

I’m on a mailing list where, earlier today, a discussion arose about patents, the lawsuits they can spawn, and whether the great early American inventors had to contend with anything like today’s legal environment. One participant made an offhanded comment about “200 years ago, before society became so litigious,” and so I emerged from the woodwork to write the following.

Oh yay, someone triggered one of my favorite rants.

Though it’s common to hear people say so, it’s not true that our society is qualitatively more litigious now than it was in some halcyon past. Americans have been suing the pants off each other since even before we were Americans. A notable feature of colonial America was the litigiousness of its people compared to their British counterparts. (Indeed, compared to all the rest of Christendom.) And though it’s easy reflexively to decry this aspect of American society, I would like to persuade you that this is actually the very root, or at least a reflection, of American greatness.

What does it mean for a citizenry to be litigious? Does it mean that they have more grievances against one another than elsewhere? Almost certainly not; neighbors have had the same complaints about each other throughout recorded history. Does it mean they’re more vindictive toward one another? More spiteful?

No. It means that when disputes arise, even the lowliest commoner has such faith in the law and such equal access to it that he readily turns to the courts for redress. Not to individual reprisal. Not to generational vendettas. Not to local strongmen. The law. In America the courts are and always have been accessible to everyone who wishes to bring business before them. This was not true in 18th-century England and is still more true in America than in most other places. So when Americans disagree and can’t settle the difference themselves, they sue each other, and they trust the justice that’s dispensed, and they abide by it, and it’s the very height of civilization to do so.

Obviously it’s better when people can work things out themselves, but they can’t always. What better next step is there (when the issue is not frivolous) than to sue? Why must there be such a strong negative connotation attached to it? It’s your right to sue that keeps honest those people who might otherwise have inordinate power over you: your doctor, your accountant, the makers of your car, of your food, the executives of companies in which you own shares, etc.

We’ve been convinced to equate the right to sue with frivolous, wasteful lawsuits that line the pockets of greedy litigators. It’s only because of that association that we think nothing of routinely waiving that right. It is now ubiquitous for corporations to insist on binding-arbitration clauses in contracts with individuals who are all but powerless to negotiate them away. This is as un-American a practice as I can imagine and I urge everyone to agitate against it. 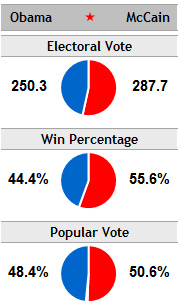 When John McCain and Sarah Palin win the election and then finish off the destruction of the planet that Bush and Cheney began, will you be able to say that you did everything you could to stop it? Did you give the maximum allowed by law to the Obama campaign? Did you register voters? Did you work the phones or knock on doors canvassing for votes? Did you change any minds? Or were you too busy shopping and watching TV? Was it a good movie? One where the hero saves the world and you thought, “Wow, if only I were cool enough to save the world”?

Rolling Stone ran a feature on their website recently: “The 25 Funniest Web Videos (No, Really!)” First on their list: “Fat Kid on Rollercoaster,” from Australia’s Funniest Home Videos.

It’s fifty-seven seconds of hell. The camera is tight on two rollercoaster passengers. One is in extreme distress, pleading for help as he suffers unending pain and terror from which he cannot escape. His tormentor sits at his side, cackling with delight. A canned laugh track perfects the horror.

I am not exaggerating. See for yourself, if you can stomach it.

Enough people saw humor in that video that it made the Rolling Stone list and earned a lot of defenders in the online commentary, where a few folks who still have some common decency (“I don’t see what’s so funny”) expressed their dismay at those who found it funny (“Lighten up, it’s a terrified fat kid now being endlessly humiliated, haw!”).

One gets the impression that the common-decency folks are in the minority. Which explains much about the state of the world.

This past weekend we took a family roadtrip to L.A. to see my dad and his wife, who were passing through, and to see new (but fully grown) family member Pamela, and to visit Disneyland once again, which we were not originally going to do but which we decided almost at the last minute we couldn’t not do while so close.

Friday night we ate dinner at Pirate’s Dinner Adventure, where actors and actresses who are waiting for their agents to get them better gigs (but are none the less enthusiastic, ’cause you never know who might be watching) perform a musical acrobatic pirate comedy aboard an elaborate pirate-ship stage while you eat your dinner and are occasionally called upon to participate. It’s just a few doors down the road from Medieval Times — same idea, but with knights and horses. Since seeing it depicted in The Cable Guy, I’ve wanted to try a medieval-style dinner, with no utensils for your mutton leg and nothing but mead to drink. I said as much as we sat down to the pirate dinner and Andrea told me, “We did that years ago at the Excalibur in Vegas.”

No way, I said. She described some details from it. You’re making that up, I said. I had absolutely no memory of it. But I knew she was right, because she always is about this sort of thing. Try as I might, though, I could not conjure any genuine memories of that dinner show. I could remember plenty of other details from that Vegas visit and others, but that entire experience, which I fully acknowledge did happen, is a complete blank.

Why? I have no idea. If I did drugs or drank to excess, that might explain it; but as is almost always the case, I was sober as a judge. If I were a seriously sleep-deprived new parent, that might explain it, but this was years before kids. No, I simply don’t remember it. I remember Siegfried and Roy, I remember Penn and Teller, I remember David Cassidy, Lance Burton, Wayne Newton, and two different Cirque du Soleil shows, but for no discernible reason, not that one.

Which raises the question: what other episodes from my life are missing? At least I haven’t ever woken up next to a dead hooker. I think.

However, nothing can fix the fact that in 2000, the American people did not revolt when the Supreme Court halted a legal recount and handed the presidency to George Bush on the flimsiest of pretenses. Nothing will change the knowledge that in 2004, after things had already gotten terrible, America re-elected Bush because they were persuaded by repeated insinuation that John Kerry was a flip-flopping coward from France. And there’s no erasing the fact that Obama is running almost neck-and-neck with a lying, hateful, ill-informed, septuagenarian, unhealthy, misogynist warmonger and his lying, vindictive, ill-informed, unpatriotic, thieving, scandal-plagued running mate.

America, WTF? Yes, we’ve all imagined our own versions of the strangely familiar feel-good comedy that ensues when McCain croaks and Sarah Palin has to step into the Oval Office to become the sassy, brassy commander-and-working-mom-in-chief. She’ll give the world some tough love and a dose of what it really needs, right?

Wrong. If you really want to see that, that’s what we have Hollywood for. The election is about people’s lives. It’s about the fucking qualifications.