Skip to content
This is a followup to The nature of reality, part 3: Gravity specifics.

The speed of light, we know, is the universe’s speed limit. Nothing can move faster than that through space.

If this is anything like right, then it supplies an intuitive foundation for thinking about all kinds of weird mysteries: why the speed of light is a constant in all reference frames (the paradox that got Einstein thinking about relativity in the first place); what’s special about acceleration; and time dilation and the physical basis of the Lorentz transformation.

Reality is maddening. A deep understanding of it is elusive. If you think you understand its nature, you’re not trying hard enough.

Every now and then, however, I get a flash of insight that seems to put the nature of reality just nearly within my grasp. The feeling is brief and tantalizing, like trying to recall the details of a dream as they evaporate on waking. But it’s thrilling.

My latest one came while pondering the odd fact that there is no discernible difference between gravity and the acceleration due to motion.

When you’re sitting in a parked car, there is a force pressing your butt down into the seat. That’s gravity acting on your mass. (I’ll refrain from making comments about the mass of your butt.) When you peel out of that parking space and go from zero to sixty in 6.2 seconds, there is another force pressing your back against the seat. That’s acceleration. Science says that if you didn’t already know which force was acting on you, and the only clue you had was how it felt (not how it looks out the window, not the roar of the engine, not that you remember the Earth being beneath your feet when you got into the car, etc.), you couldn’t tell whether you were sitting still in a gravity field or accelerating through space, or some combination of both.

This turns out to be useful for sending humans on long interplanetary journeys in the future. If we invent a propulsion system that can sustain enough power continuously, then the spaceship can accelerate at 1g halfway to its destination, then turn around and decelerate (which is just accelerating in the other direction) at 1g the rest of the way. The humans on board will avoid the many health hazards of prolonged weightlessness; they’ll experience “gravity” holding them to the spaceship’s floors.

You can have lots of velocity and still have zero acceleration. If you plot your position over time on a graph, anything that’s a straight line means your velocity is constant and you’re not accelerating. To get acceleration, the graph needs to curve. (Any curve will do, but if the acceleration happens to be constant, then the curve is a parabola.) 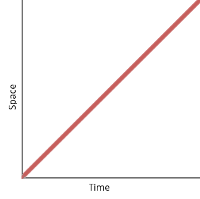 Unchanging velocity; no acceleration, no force. 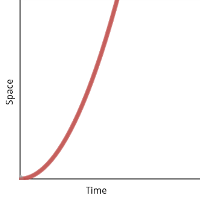 Velocity changing at a constant rate; produces a parabolic curve and a steady force.

Wrap your head around this

Here’s another recent insight that might help you to understand the idea of spacetime: The Big Bang happened in this very spot 13.8 billion years ago, and it’s also happening right now, 13.8 billion light-years away in every direction.

When you’re standing still on the ground and experiencing the pull of the Earth’s gravity, what’s changing to make that feel like acceleration? Not your position (with respect to the Earth). Not the rate of change of your position. But time is passing, and thanks to Dr. Einstein we know that space and time are mysteriously bundled together into something called spacetime. So even if you’re not moving through space, you’re always moving through spacetime. 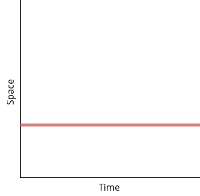 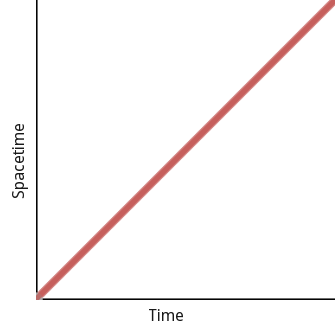 …is still moving through spacetime.

Well, hang on. We know (also from Einstein) that the presence of a large mass like the Earth causes spacetime to curve — whatever that means. So maybe it’s wrong to draw our spacetime axis as a straight line.

Straightening the axis again forces the plot into a curve. (In fact, in this [manufactured] case it forces it into the shape of our old friend the parabola.) 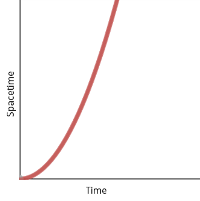 So. I’ve managed to convince myself that just standing still in a region of curved spacetime can look exactly like accelerating in a region of flat spacetime. Spacetime itself remains a difficult idea to internalize, to say nothing of it being curved, and even if I’ve managed to make one graph look like another in a hand-wavy way, still none of it makes any intuitive sense.

But I observe that moving at a constant velocity requires no energy. You need energy to change your velocity — i.e., to accelerate. And you need mass to curve spacetime. And as we know (thank you once again, Dr. Einstein), energy and mass are the same. Somehow it’s all down to the interactions between space, time, and energy. But what are they?

See what I mean? I can almost feel what real understanding would be like. It’s maddening.

When I was young, I was smart, and I knew it. And when I thought about how I would attract women, it was always going to be with my big brain. Some of my peers sported fashionable clothing. Some could dance. Some were athletic. Some played musical instruments. Some could make small talk. I disdained them all as beneath me. I attended to basic grooming and hygiene, of course, but gave little further thought to my appearance. If a woman couldn’t appreciate me for my wit and my wisdom, it was her loss, not mine.

These were actual conscious thoughts I remember having. (In fact I was rationalizing what was, at root, simple laziness.) At the very same time I was having them, whose pictures did I have on my bedroom wall? Supermodels. Christie Brinkley. Paulina Porizkova. Cindy Crawford. Which classmates did I have crushes on? The prettiest ones, the same ones all the other boys liked.

This hypocritical disparity never struck me, I’m chagrined to admit, until just a few years ago, around the time I started thinking about advising my sons on how to attract women, when the time comes. Happily they’ve got a nice head start compared to where I was at their age. They’re athletic and musical. They’re starting to show some fashion sense. Crucially, they’re smart, smarter than I was: smart enough to understand that smarts aren’t everything.

Now suppose everyone gets vaccinated. Of the 10 people you come into contact with, on average only 1 will be infected. Your odds of getting sick are now only 10%.

That is the power of herd immunity.