Skip to content
Geez, post one tiny picture of a naked woman and your whole blog turns permanently into Times Square. (Er, the seedy Times Square of my youth, not the oppressively unobjectionable Times Square of today. [Or the celebratory Times Square of tonight.]) I was going to write my annual “What brings you here” post that tallies the top queries drawing readers to this site, until I discovered that Polly Walker’s nipples, which last year drew 30% of this site’s visitors, now draw nearly twice that: 58%. Almost all of the other queries disappear in the statistical noise.

It’s true that I updated this blog far fewer times in 2009 than I did in 2008, but I did add 46 new posts, which isn’t nothing, and none of that new content was prurient — in fact there’s been only one new post in the “sex” category since “When on Rome” two years ago. You’d think that the drawing power of Polly Walker would be dwindling, not growing. You’d think that a few fuzzy flesh-colored pixels would count for little next to the attempts at erudition, humor, personal reminiscence, political ranting, and heartwarming family anecdotes that make up the preponderance of the site.

Well, sex sells. Hopefully the thing it’s selling is a little intellectual uplift to the single-minded degenerates who stumble across this site!

The last I wrote about my backup tool, ibid, was three years ago (here; earlier post here), but I’ve continued making refinements to it. Then it was at version 24; now it’s at version 47 (download it here). Here are the changes since then, minus the uninteresting ones:

There’s still no home page for ibid, but at least now all ibid-related posts on my blog are grouped under the tag ibid.

The guy in this song hasn’t visited our house yet, but I can’t imagine it’ll be much longer.

You better have doubt
You better ask why
And think it all out
I’m telling you why:
Skepticlaus is coming to town

He hasn’t a list
That wouldn’t make sense
All the world’s kids?
That would be immense
Skepticlaus is coming to town

He sees you when you’re with him
And doesn’t when you’re not
He knows if you’ve been bad or good
If you tell him, or you’re caught

Reindeer that fly?
Or is it a hoax?
Which is more likely?
Don’t ask your folks
Skepticlaus is coming to town

Thirty-one years ago I was a very secular Jew, along with my family and a large proportion of Jewish families in New York City. We lit candles on Chanukah, we read the Haggadah at Passover, and we told each other happy new year in the middle of September, but that was about it as far as the religion went, and it suited me fine.

But then my friends started having bar mitzvahs and I got jealous. So some time in 1979 I informed my parents — who had left the decision up to me, and who thought they were getting off the hook without planning a bar mitzvah — that in fact I wanted to have one and that it had to be before the year was out. I didn’t want to be the only one of my friends whose bar mitzvah spilled over into the next decade!

To have a bar mitzvah I had to be able to read Hebrew, which meant going to Hebrew school, something that bar-mitzvah-bound kids began doing at age eight or nine; and here I was already pushing thirteen, the bar mitzvah age. Forest Hills Jewish Center, a conservative synagogue, wouldn’t take me, because I was too old. (A year later, Yoda would make the same complaint about training Luke Skywalker.) But Temple Sinai, a reform synagogue (now The Reform Temple of Forest Hills), did.

I was the biggest kid in the class but a motivated student. Within just a couple of months I was reading Hebrew fluently — which is to say, I learned the alphabet and the pronunciation, and so could make all the right sounds. Comprehension was something else altogether.

Rabbi Irvin Ungar set my bar mitzvah for the fifteenth of December — just made it! — and began my training. I started attending sabbath services each week to become familiar with the sequence of events and the liturgy. I learned how to chant my Torah portion (“Vayeshev”) and my haftarah. It was my first serious exposure to ritual and I took to it like a duck to water. Combined with Rabbi Ungar’s learned and gregarious mentoring style, and influenced by the involvement of my friend Chuck with his synagogue, I became a surprisingly observant Jew, to the delight of my parents (who, as noted above, were not themselves particularly observant).

While I was receiving religious instruction, my parents were busy planning the reception. They booked a ballroom at the Sheraton in Elmhurst and sent invitations to the extended family. I invited some of my new Hunter friends and a few from my elementary school days. A couple of months before the event, I stopped eating chocolate and fried food entirely, determined that this was the best way to ensure blemish-free skin on the big day. (And it worked!)

The party needed music, and my parents began looking into bands and DJ’s. One musician (with the memorable not-to-be-confused-with-the-auto-repair-chain name Lee Myles) offered to come to our house with a videotape of his band performing — and to bring along a videocassette player, which in 1979 almost no one had. I was beside myself with excitement at the prospect of seeing one of those contraptions in operation in my very own living room, and when he arrived, everything he said to my parents was just so much droning. It took forever before he finally stopped talking and hauled the enormous player out from its carrying case, along with its multifarious cables and adapters. That’s when I finally joined in the conversation, chattering away about the relative merits of coax connectors versus spade lugs, VHS versus Betamax, tuning via channel 2 versus channel 3, etc. In the end we got to see about thirty disappointing seconds of fuzzy video footage before all the equipment got disconnected and put away.

Everything finally came together on this date thirty years ago. 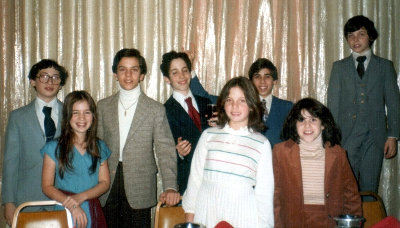 I conducted my parts of the Saturday-morning service so well that I was invited to become Temple Sinai’s first official “rabbi’s assistant,” a position I held for many weeks thereafter. I delivered an original speech about Judaism and becoming a man and so on that I remember not at all, but that was received (atypically for a bar mitzvah speech) attentively and with disbelief that I’d written it myself. And the reception, though mostly a blur, was memorable at least for the poster-sized cartoon wailing wall that my father drew and stood on an easel for my guests to sign (and that became a wall-art fixture at home for years); and for the moment that my friends took me aside and welcomed me to official manhood by literally showering me with foil-wrapped condoms (which were far more giggle-worthy then — and embarrassing to buy — than they are in this age of strident safe-sex awareness).

Some months later, Rabbi Ungar moved far, far away. His replacement, whatever his virtues might have been, was a zero in the motivating-young-people department. My scientific bent (and attendant religious skepticism) reasserted itself, the novelty of a Dixie cup of sweet wine each Saturday morning wore off, and my tenure as rabbi’s assistant, and my flirtation with a devout life, ended soon after.

Postscript. Helen Keller was one of my mom’s heroes, and The Miracle Worker, the story of Keller’s relationship with the blind teacher Annie Sullivan, was one of her favorite movies.

In trying to find a web link for Temple Sinai while writing this article, I ran across an article entitled, “Helen Keller: Citizen of Forest Hills.” It was the first I’d ever heard that my mom’s hero lived in the same neighborhood where (years later) she raised me; I’m not sure my mom ever knew. But more than that — the article reveals that Helen Keller’s Forest Hills house later became the very site of Temple Sinai!