Skip to content
It was shaping up to be a disaster.

It had started well enough: a fun driving adventure on a gorgeous Indian-summer afternoon through the southern reaches of golden, hilly wine country. The object of our quest: Sonic Drive-In, a new burger place that my sister Suzanne had suggested we check out. It sounded good — they serve cherry limeade! — and with a clear blue sky and a full tank of gas we needed little excuse to hit the road. The thirty-odd miles to the nearest Sonic presented no obstacle; quite the opposite.

Things changed as soon as we took the turnoff for state route 29, the main road through Napa. At lunchtime on a beautiful Saturday afternoon it was a parking lot. It took ten minutes to go those last two miles. Archer wouldn’t stop kicking the back of my driver’s seat, and after asking him several times, then giving a couple of warnings, I told him he’d lost a dollar of his week’s allowance — so he began sulking. Next to him, Jonah acted extra-sweet in a craven effort to contrast himself with Archer. As we inched along the road at one-tenth the posted speed limit, the fact that it was 90 minutes past our usual lunchtime started to make itself felt. Tempers flared. Patience wore thin. There was whining. My own vocabulary shrunk to monosyllables. 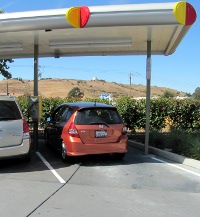 Finally we arrived at Sonic Drive-In which, despite its name, we were surprised to discover actually was a drive-in. We pulled into one of the order stalls in the parking lot. The prospect of eating in the same car where we’d been entombed in traffic did not exactly appeal, so I opened my door to discover whether there was any indoor seating. I say I opened my door, but note that I didn’t say I stepped out of the car, since the stall’s menu and ordering station only allowed me to open it a few inches. Nevertheless I extruded myself through the narrow gap and scoped out the restaurant. There were some nice outdoor tables, but Andrea nixed those, insisting it would be fun to eat in the car, vintage-drive-in-style. “Fine,” I monosyllabled through gritted teeth. 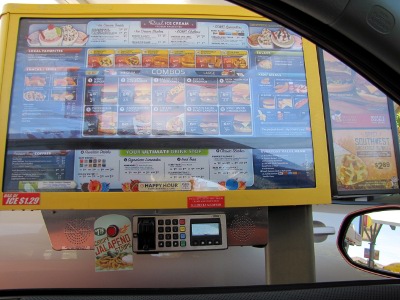 Then the kids had to decide what they wanted to order, then vocally change their minds several times, while I had to comprehend 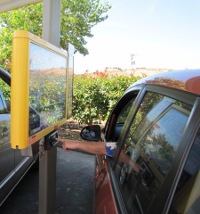 the visually taxing menu myself through the red haze that filled my field of vision. Even now that I’ve long since recovered I don’t care to recall those few minutes, for me the low point of our outing. Finally we placed our order and I walked outside around the car, trying to breathe deeply from my center.

(Luckily for all of us, Andrea was a beacon of sanity throughout, maintaining a level of composure that ultimately was the only thing that allowed us to get as far as placing an order — or to take pictures.)

Things started to look up a very few minutes later when to our delight, our food arrived on a tray carried by a friendly woman on roller skates. (To be honest, the actual first gap in the storm clouds was when I spotted tater tots on the menu. Tater tots!) She hooked it onto an open window and we distributed our food items to one another and tucked in. At the first bite, Samuel L. Jackson sprang to mind — This is a tasty burger! — and the tension melted away on a wave of beefy goodness. I popped a few tater tots into my mouth and an actual smile spread across my face. When I asked the kids (who’d clearly been affected by my mood and by hunger) how it was, I got two thumbs-ups.

With the edge taken off, we were able properly to enjoy the rest of our meal. We ordered ice cream cones for dessert. I apologized for my grouchiness. When it was time to leave, we were sorry to go.

When Suzanne suggested we visit Sonic she requested a full report of our experience, in fulfillment of which I can faithfully declare: Thank you Sonic, you saved my Saturday. 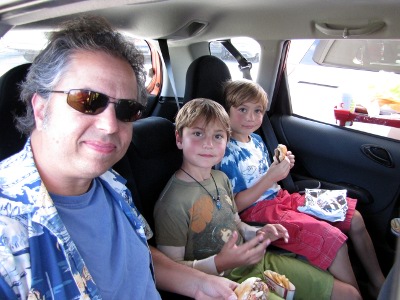