Skip to content
A few days ago, my friend and former colleague, the funny and talented Greg Bulmash, visited my blog after a prolonged absence. There he saw my latest What brings you here post and grew curious about vampire lesbian girl scouts.

If I say so myself, the phrase “vampire lesbian girl scouts” all but demands further exploration.

Anyway, he wrote about it on his own blog in what he claimed, in e-mail to me, was an innocent shout-out. But I know what was really going on: he wanted to muscle in on some of that “vampire lesbian girl scout” search traffic. Indeed, as of this moment his post has taken over the top spot from mine in a Google search for that phrase.

The war is on. And this post is my escalation. Presenting the geebobg Vampire Lesbian Girl Scouts t-shirt! 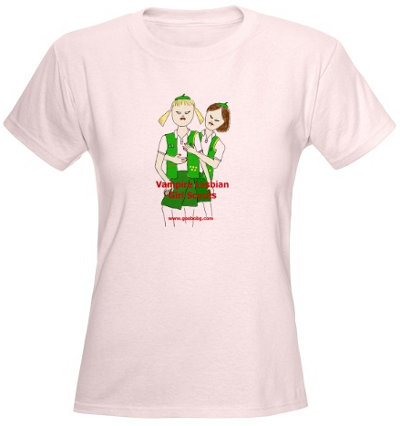 Available in men’s and women’s styles and a variety of colors in the geebobg CafePress store.

While you’re there, pick up a Mucoshave coffee mug for that special someone!

Speaking of presidential inaugurations, it was only a few days ago that we were deeply moved by watching America’s latest one; and then last night we watched the very first one — that of George Washington, also very movingly staged, in the HBO miniseries John Adams. 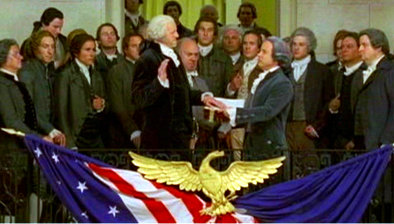 The kids have been clamoring to watch each new episode of this enriching and educational show, which we pause often for discussion. They love it! How lucky am I?

This morning we woke up a little earlier than usual. I sent e-mail to Jonah’s teacher saying he’d be late to school. We ate breakfast, piled into the car, and drove to 142 Throckmorton, a theater in downtown Mill Valley. The sky was blue and the bright sunshine made it too warm for the jackets we wore. Inside the theater were old hippies, young families, and teens gathered to eat pastries, drink coffee, and watch Barack Obama take the oath of office. On the screen at the front of the theater, C-SPAN showed the activity on the steps of the Capitol and the throngs packed onto the National Mall. The crowd cheered for Bill Clinton and booed for Bush and Cheney. We took our seats, Jonah on my lap, Archer and Andrea beside me. Obama appeared and the kids began to cheer without any prompting. The audience rose to its feet for the first of several times. We watched the ceremonious proceedings with our arms around one another, exchanging frequent smiles. Andrea and I cried. Obama was sworn in; the place erupted with jubilation. He delivered his speech. The kids asked questions; we explained. Many times, a phrase spoken by Obama was answered with a heartfelt “Yeah!” from one person or another in our audience. “We will restore science” — huge cheers. “We reject as false the choice between our safety and our ideals” — huge cheers. Afterward: catharsis, hugging, strangers congratulating one another, and as we filed out, an impromptu drum circle on the street.

It meant more to me than I can express to watch this inauguration with my sons in my embrace, all of us appreciating the historic importance of the occasion. It is for them, after all, and for their adorable counterparts Malia and Sasha, that President Obama and I must fix America.

Today newspapers and blogs are full of praise for Chesley Sullenberger, pilot of US Airways flight 1549, and his crew, and the rescuers who saved every life aboard that plane when it ditched in the Hudson yesterday. And rightly so: Captain Sullenberger had just moments to make a difficult decision, and he made the right one; and then he executed a flawless water landing while superb coordination of resources on the ground meant that several watercraft were almost immediately on hand to pluck the survivors from the icy river. Kudos all around; a tickertape parade would not, in my opinion, be unjustified.

But if all the lionization today and the talk about heroism and miracles seems a little too breathless, I blame — who else? — George Bush. This impressive display of can-do professionalism comes in the final hours of an eight-year interregnum marked primarily by no-can-do incompetence.

You couldn’t ask for a more vivid way to throw the past eight years into sharper relief. America, we were always taught, was the land where an abundance of know-how and elbow grease could defeat the Axis, put a man on the moon, create a succession of world-changing technologies, and be a beacon of justice, progress, and courage for the whole human race. Yet for most of this past decade we’ve witnessed fear dominating our policymaking, the loss of a major American city through neglect, the destruction of our present and much of our future wealth (and the crippling of our very system for generating new wealth), stagnation in the sciences, official disregard for the law, our international alliances in tatters, an assortment of ecological crises growing more severe and numerous by the week, two disastrously mismanaged wars, an avalanche of doublespeak, and a much, much longer litany of abuses and failures than I can bear to put down here but which you can find enumerated in many essays and articles this week reflecting on the exit of the Bush administration. Bush used his farewell address to the nation to make petulant excuses for why things weren’t better under his watch.

America is where a seasoned pro with a cool hand on the controls can set his disabled jumbo jet in the water and be met by dozens more seasoned pros with a plenitude of training and equipment to rescue passengers who were marshaled out of the sinking wreckage in an orderly fashion by an equally well-trained crew of professionals.

America is where the incoming president has lined up an all-star team of experts and achievers to help him govern, instead of what we’ve grown accustomed to: cronies, patrons, figureheads, and yes-men.

In short, America is where the people are competent. It’s been so long since that was the case, we’ve all forgotten what competence looks like, so that when we see it in action like we did yesterday in the Hudson River, it takes our breath away.

Think of how routinely our parents and grandparents got to see American competence in action, and how little this generation has seen of it. We’re right to laud Captain Sullenberger and the others as heroes, but we’d be wrong to place them on a pedestal. Theirs is the ordinary heroism we should expect from any American in a position of responsibility. If we’re to learn anything from the Bush administration, it’s never to let them lower our standards. No more setting the bar low. From now on, we demand competence.

I saw somewhere that today is the 200th birthday of Louis Braille, inventor of the Braille system of writing for the blind. As his legacy can easily withstand a little friendly competition, I figured it’s a good day to mention Moon Type, the little-known alternative to Braille.

In the same sally through the encyclopedia that uncovered Moon Type, Chuck discovered in the entry for “warthog” this caption beneath an illustration: “The warthog is one of the world’s ugliest animals.” This tickled us no end, but a year or two later when the library got an updated edition of the encyclopedia, we were even more amused to see that the same illustration now had a more scholarly and much less colorful caption, along the lines of, “The warthog can be distinguished by its tusks.” We delighted in imagining the outraged protests from some Warthog Appreciation Society that resulted in the politically correct change.

My friend Chuck discovered Moon Type in seventh grade while browsing through a copy of the World Book Encyclopedia in the school library. Developed around the same time as Braille, its alphabet consists not of raised dots but of simplified, recognizable letterforms.

The Moon Type alphabet
(lovingly rendered by yours truly)

Chuck and I decided that Moon Type, as obscure and yet as simple as it was, was ideal for passing coded messages to each other. We committed it to memory and used it thereafter from time to time when we desired an (admittedly light) extra level of security on our written communications — which consisted mostly of jokes, plans for world conquest, and not-fit-for-publication commentary on our female classmates.

On one dismal occasion, that extra security failed memorably. Chuck and I were at the apartment of my girlfriend Andrea (not the Andrea that I married). Andrea’s parents were out of town and I was hoping Chuck would get the hint about giving us some privacy. I wanted to use this perfect opportunity to advance with Andrea to, shall we say, a less consistently frustrating level of physical intimacy. We were having a grand old time, the three of us, but when the hour began to grow late and Chuck was still hanging around, I decided to pass him a coded message — coded once with Moon Type, and coded again by being worded obliquely in case of interception. The message was, “book.” I expected Chuck immediately to apprehend its slang meaning, which we sometimes used, of “leave” — and to be unoffended by the request, and to comply at once while making it look like leaving was his idea, as demanded by the Guy Code.

Unfortunately for me and my hormones, all of those expectations were wrong. I handed him the folded piece of paper behind Andrea’s back. Of course Chuck deciphered the Moon Type immediately — this was in tenth grade, and by now we had been using Moon Type for years. But our usual ability to know just what the other was thinking left him just then, and he said to me in a puzzled voice, “Book?” I tried to shush him and to clarify my intent nonverbally, but this only puzzled him more and he inquired again, within Andrea’s hearing, as to what I could have meant. Now she grew curious too. Ignominiously I tried to change the subject, and then (when that failed) to pretend I’d been trying to remind Chuck about a book he’d borrowed from me, but then why would I have written a coded message about it? Suddenly Chuck got it — “Oh, you want me to leave!” — and he got huffy, and Andrea got pissed off, and that was the end not only of that evening but of all future attempts to, ahem, “advance” with her.

At the time it felt like a disaster for my relationship with Andrea, and indeed it was; but I didn’t realize then that the lasting injury would be my guilt about having offended Chuck, my best friend. In the many years that have passed I doubt I ever apologized to him for it, and though I’m sure in hindsight he considers this incident to be minor and excusable by the ordinary cravenness of teenage boys, I still feel like I owe him this public: “Sorry, man!”