Shortly before leaving California a week and a half ago to visit my family back east, I got this e-mail from my excited dad: 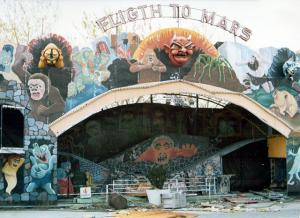 It was a play on words (and a clever one too — you go, Dad!) and also an in-joke: “Fligth to Mars” was the misspelled name of a ride at Adventurer’s Inn, a small amusement park that used to exist in Queens when I was a boy. I didn’t realize just how little a boy I was until I read that Adventurer’s Inn was condemned in 1973, when I was just seven. I have clear memories of several visits there. Of course the condemned site remained for a long time until it was finally bulldozed, and I passed by it many more times as I got older; perhaps that’s what kept the memories fresh. Is there a sadder sight than a long-abandoned amusement park?

I think I was the one to notice the misspelling on the Fligth to Mars ride, and it’s been a catchphrase in my family ever since. The ride was your typical motorized cart traversing a funhouse on tracks. One time while on that ride, just before emerging back into daylight, I felt something smack the top of my head, hard enough to startle but not to hurt. I tried to convince my parents that a piece of wood or something had dislodged and landed on me, and I was even briefly convinced that there was a new area of flatness at the top of my skull as a result. They never believed me, and so I doubted it too — until today, when I read that Adventurer’s Inn was condemned soon thereafter!

And look! The Batman slide! I remember that too. To a seven (or less) year old it was terribly daunting. But also tempting — it was a Batman slide! How could I not? Finally on one visit I worked up the nerve to give it a try. I got a mat on which to slide down, and I lugged it up and up the stairs in the interior of the structure. At the top, facing the maw opening onto an abyss (or so it seemed), my courage flagged and I froze. A queue of eager, bigger kids began to grow behind me and I believe I started taking some verbal abuse. Finally I turned around, feeling miserable, and began down the staircase as other kids muscled past me on their way up. At the bottom I surrendered the mat and was comforted by one or both parents, applauding me for resisting the pressure to go ahead, and assuring me that I never have to do anything I don’t want to do. I’m still sorry I never braved the Batman slide, but I think the humiliation I felt on that long climb down the stairs has been usefully instructive all my life.

2 thoughts on “Fligth to Mars”