Skip to content
There are no fireflies in New York. I never saw any in New York while growing up, but I grew up in Queens, which is part of the city proper, and I thought we might get lucky at my dad’s house which is farther out on Long Island, since I knew that there are fireflies not too far away, in Pennsylvania. But no.

No thunderstorms, but you already knew that.

Warm ocean water: check. I’d forgotten just how big a difference there is between New York beaches and California beaches. The sand in New York was soft, fine, and well-groomed — no doubt the effect of charging admission to the beach — whereas in California, where most beaches are public-access, it’s coarse and filthy. In Northern California the Pacific is freezing and the waves daunting; only crazy die-hard surfers in wetsuits spend any time in the ocean. In New York, entire families spend hours bobbing in the warm, gentle swells.

Dino-Walk was kinda lame, but the town of Riverhead is nice in a Norman Rockwell way, even if their church bells won’t shut up.

At Dylan’s Candy Bar, I allowed Jonah and Archer to fill up one bag of candy apiece, and I got a few things for myself, my sister, Suzanne (who accompanied us there), and Andrea. Guess how much I spent? $91. When the cashier rang up the total I let out an involuntary “Holy shit!” He smiled the smile of someone who’s gotten that reaction before.

The Long Island Children’s Museum is the greatest place in the whole wide world. We also visited the New York Hall of Science, and even though it was greatly expanded from when I was a kid (when its chief attraction was [what passed in the 1970’s for] a multimedia presentation about the wonders of nuclear power, brought to you by Con Edison), it couldn’t hold a candle to LICM. And next to the LICM, the Exploratorium is a total crapfest. 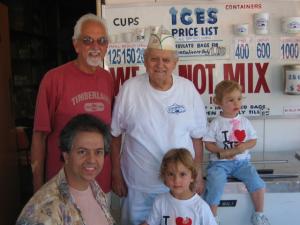 One thought on “New York recap”