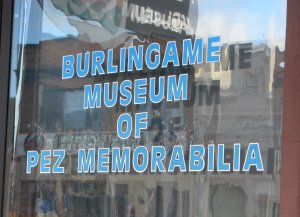 A week ago, Andrea and I learned of the existence of The Burlingame Museum of Pez Memorabilia. So this past week we finally gave Jonah and Archer the Pez dispensers (Batman and Spider-Man) that my mom sent them for Christmas last year and that we withheld because we’re mean rotten parents. We also introduced them to Colorforms, which the museum also exhibits (in addition to a handful of other classic toys). Then, on Saturday, we visited the museum. 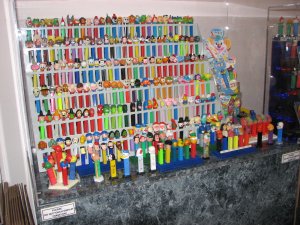 It’s small but great! Don’t plan to spend more than fifteen or twenty minutes there, but while there you may get a guided tour like we did and learn some truly fascinating Pez arcana. (Pez arcana spoilers [highlight to read]: Pez is made in Austria and was originally available only in peppermint [you get “Pez” by abbreviating “Pfefferminz”]; they were first sold in little tins like modern Altoids; the first Pez dispensers were headless.) You’ll also see the short-lived 1950’s era Pez “guns,” perfect for (in the words of our guide) shooting your friends in the head with Pez, and now the object of my sons’ keenest desires.

After viewing the exhibits, we shopped the museum’s Pez store. I spotted a “complete collection” of Incredibles Pez dispensers. It contained Mr. Incredible, Elasti-Girl, Dash, and Jack-Jack. I asked the owner/curator/tour guide, “Where’s Violet?” He said, “Everyone asks about that. They never made a Violet for some reason.” I joked, “Maybe she’s invisible.” He said, “Everyone says that too.”