In 2001, Andrea and I went to Thailand, our last travel hurrah before starting a family. While we were in Bangkok, we were roped into the famous Thai “gem scam.” The funny thing is that we had been warned repeatedly about this scam and others, both by friends who’d been to Thailand and by the Lonely Planet guidebook, which we read faithfully before arriving. It described the exact scam, but we still didn’t recognize it when it happened.

We arrived in Bangkok late at night and went right to sleep. The next morning we opened our guidebook and decided to take a walking tour in the vicinity of the Grand Palace and Wát Pho. From our fancy, sheltered Western-style business hotel we rode the water taxi up the Chao Phraya to the correct stop, got off the boat, and stepped into the streets of the most foreign and exotic place we’d ever been. We oriented ourselves and found a bank where I exchanged some currency. Then, trying to decide in which direction to start off, a friendly Thai gentleman with excellent English offered us help. We were mindful of the “don’t let anyone change your plans” rule, but that was no reason to be impolite; we struck up a conversation together. When we mentioned that we planned to see Wát Pho, he gestured to it across the street and said, “It’s closed until 2pm today,” saying something about a monthly Buddhist observance. Sure enough, the gates were closed and chained. “But there is much else to do until then,” he offered, and said his friend the tuk-tuk driver would take us to several sites for the next few hours for only 40 baht, waiting for us at each stop. Circling points of interest on our map, the gentleman suggested we see the Golden Mount, Wát Traimit, and one or two other things before returning to Wát Pho, by which time it will have reopened. “You should also see the Export Center,” he said, “where they sell gems and other goods at a huge discount. It’s not where the tourists go, it’s where the pros go, and furthermore today is the last day of an annual nationwide two-week sale.” The Export Center was conveniently located between two of the attractions on the map.

We were wary at first but the friendly gentleman was persistent and finally we agreed to his plan. Off we went in the tuk-tuk into Bangkok traffic — a harrowing, smelly, exhilarating thrill-ride! We loved each of the attractions we saw. 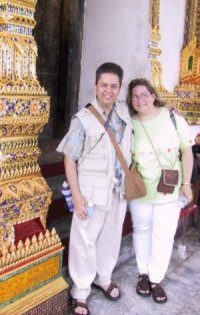 At Wát Saket, we ran into another friendly Thai gentleman who welcomed us to his country and offered to give us some of the history of the wát, which is where he did his monastic training many years ago, and where his family has an affiliation. For the next twenty minutes or so he was our tour guide, giving us the history of Thai Buddhism, interpreting the temple’s murals, explaining proper respectful behavior, and so on. (The image at left was taken by him.) As we were taking our leave to go back to the tuk-tuk driver, he asked what our plans were for the rest of the day. We mentioned the remaining stops on our tuk-tuk ride, and when we said Export Center, he seemed surprised. “How did you know about that? That’s not a place that tourists usually go.” Then he told us how lucky we were to know about that, because of this sale that’s going on and because of the excellent prospects for buying good gems at cheap Thai prices and selling them back in the U.S. at enough of a profit to pay for our whole vacation. “Look for this symbol,” he said, showing us a majestic spread-winged bird on his Thai Airlines business card, “it denotes government-approved gemsellers. And ask for stones with triple-A ratings.”

We thanked him and continued on our way. When we came to the Export Center, we were surprised to see that it wasn’t the bustling center of commerce that its name suggests. It was a little storefront down a side street with no customers. Inside, we got bottled water and some much-needed air conditioning, and a high-pressure sales pitch, during which the salesman showed a certificate bearing the spread-winged bird and mentioned “triple-A rating” several times. Fortunately our sales resistance was high. Meanwhile, we wandered into an adjacent tailor shop and had some beautiful silk clothing tailored!

We finished our tuk-tuk drive, having returned to Wát Pho and made friends with our driver, who struggled with English while we struggled with Thai. That’s when we discovered that the gates to Wát Pho are always chained closed on that side of the street. Nevertheless, it wasn’t until much later, back at the hotel, that it slowly dawned on me that the whole thing was exactly the gem scam that I’d been repeatedly warned about: the friendly Thai gentleman; the bogus claim of a closed tourist attraction; the dramatically underpriced tuk-tuk ride; the friendly stranger who happens to confirm the first gentleman’s information; the one-day-only sale; the promise of big profits from carrying Thai gems back to the U.S. I’d read all those details in the Lonely Planet guides twice in the previous week!

They say forewarned is forearmed, but it wasn’t this time. Reading this now, it’s probably hard to imagine how we could have been fooled and still consider ourselves reasonably intelligent people. Chalk it up to the bewilderment of being in such a strange place for the first time, and the light touch of a good con artist, who can make you feel as if everything was your idea in the first place. (Note how it was we who mentioned the Export Center to the second con man, not the other way around.) A good con artist can sometimes even leave you completely unaware that you were fleeced at all.

Fortunately, most cons rely on greed, to which I’m pleased to say we did not succumb. And in the meantime, we got a much more thorough introduction to Bangkok than we otherwise would have; an informative guided tour of a Buddhist temple; a very welcome air-conditioning break; a tailored silk suit for me, which I’d always wanted but could never afford at Western prices, and a tailored silk dress for Andrea; and all for a dollar paid to the tuk-tuk driver. So who conned whom?

After sending the above story to some friends who had been to Thailand a few years earlier (and who had warned us about scams), I learned that they’d fallen for the same scam when they were there! Many details from their experience were identical to ours. I wrote some more about the experience in a reply to them, which follows.

I wonder why the claim of employment by Thai Airlines seems to be part of the scam. Is it simply that it’s one of the few respectable Thai businesses that westerners are likely to have heard of? Or is it to back up the claim of frequent trips abroad to sell Thai gems at a profit?

Our guy claimed to be a pilot with Thai Airlines, and showed us his business card, which said his name was Somchai. I said, “Oh, I’m also a pilot.” Later he mentioned having family members in Jamaica, Queens, who pay for their visits to Thailand by transporting and selling gems. I said, “Hey, I’m from Queens!”

Now, if I’m a con man, and my patter includes having a somewhat exotic profession and family members in a city on the other side of the world, and my mark says “me too” to both of those claims, I’d be sweating bullets! But Somchai kept his cool.

On our last day in Bangkok, we had only a couple of hours to see the Grand Palace and Jim Thompson’s House, both of which we’d skipped on the first leg of our trip. We found a cab driver to take us both places (at breakneck speed — there was lots of traffic and very little time before those attractions closed) and then back to the hotel. During the ride, we became friendly with the driver, as we did with nearly everyone we met in Thailand. On the way back to the hotel, he asked our permission to stop at his “sponsor,” a gem store where he gets a coupon for free gasoline whenever he brings in tourists. (I imagine he also gets a commission for any sales that result.)

This helped us to understand the gem scam a little better. Of course we agreed. We were under no obligation except to spend ten minutes or so in the store, and the driver was both friendly and up-front about the kickback scheme. After having experienced the scam firsthand, we appreciated his candor. And unlike the “Export Center,” this sponsor was a real hub of commerce. It was a giant retail store taking up much of a block on a main street, with customers streaming in and out and lines of taxi and tuk-tuk drivers outside waiting for their passengers. A line of pretty Thai hostesses greeted us at the entrance. As we approached, the one on the end peeled off and escorted us inside to a counter where we got complimentary soft drinks. There, a matronly lady with perfect English took us on a tour of the jewellers’ lab, where a few dozen men labored meticulously shaping settings, polishing stones, and so on. In the next room were rows and rows and rows of display cases full of obviously-much-higher-quality jewelry than at the “Export Center.” Scrolling LED displays prominently placed throughout the store proudly boasted, “ISO 9001 Certified.”

They didn’t have any platinum settings. If they had, I just might have sprung for the sapphire ring Andrea’d been bugging me for.

I have a book recommendation for you: The Big Con, by David Maurer. It’s from 1940 or so and is a legendary classic among documentary books about real live con games. You’ll recognize that most of the plot of The Sting, plus some character names, come from this book. (If you haven’t seen The Sting, see it before reading the book!)

That I read this book only a few months ago and still didn’t recognize the scam while it was happening boggles my mind. I understand a little better the truism that I read elsewhere once: con men, apparently, are the easiest marks.