Skip to content
It’s not clear which of us is the mountain and which is Mohammed, nor who came to whom — Ken came to my metropolitan area, but I then had to take the ferry to where he was. At any rate, Ken Jennings and I met briefly last night at Book Passage in San Francisco, where he signed my copy of Brainiac. (He recognized my name from his message forums and wrote me a classy inscription: “I’d add a movie quote but you’d probably catch a misquote.”) Andrea and the kids were in tow and Andrea was doing a yeoman’s job of keeping them contained while allowing me to sit through Ken’s pre-signing talk and then wait in line, but by the time I got to the front of the line, Jonah- and Archer-created chaos exploded through the store and I didn’t have time for more than a few words with Ken. In fact I only heard part of what Ken said to me, and Andrea heard the other part; we pieced it together later. 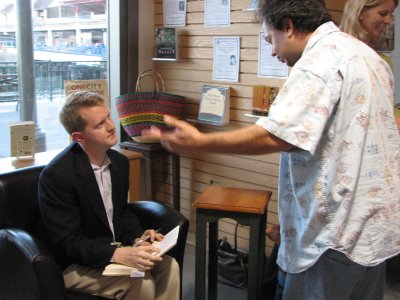 It only looks like a scene from “Polite Mormon meets Obnoxious Jew.”

The thesis of Ken’s short talk was that he doesn’t consider “trivia” to be trivial at all, and he made a case for trivia being a kind of glue holding society together. He also mentioned that he met his wife thanks to trivia (kinda like me — that’s eight!) when he knew what came next after some particular movie quote.

…Which reminds me of a story. At the beginning of my freshman year at college I didn’t know a soul and briefly contemplated pledging a fraternity. One night, one of the frats had a Repo Man rush party, but to get in you had to be a girl or invited — or so two frat brothers told me when I knocked on the frat-house door. As I was about to turn away, one of them added, “Unless you can complete this quote: ‘Find one in every car…’” I promptly supplied, “You’ll see,” and was admitted.

The party was kinda cool. Pine tree air fresheners were hung everywhere. There were cans of “FOOD” and (of course) “BEER.” The pool table in the basement had been converted into a phosphorescent Chevy Malibu. Quotes from the movie were plastered all over the walls. (One of them became the basis for the name of my next car, the “Plate-O-Shrimp” [or in the words of my sister Suzanne, the “Piece-O-Shit.”]) But frat life clearly wasn’t for me and thereafter I went about making plenty of good friends all on my own.