Who dumped a whole truckload of Fizzies into the swim meet?
— Dean Wormer, Animal House

(Sarah thought he was saying “feces.”)

Some time during the 1990’s I got word that Fizzies were being made again after some three decades of unavailability. I dimly remembered Fizzies from early childhood, when I used to mix up my own soft drinks with Fizzies tablets in my very own Fizzies Fountain. They were discontinued after health concerns arose regarding the sweetener they contained. When I heard about the reformulated version in the 90’s, naturally I ordered a large number of them in every flavor — which were all uniformly disgusting. I brought my stock of Fizzies tablets to work and shared them with a few not-very-enthusiastic colleagues. 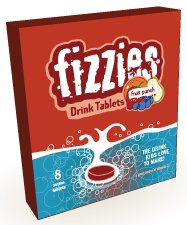 Now they’re back again in a third incarnation. I got a shipment of the new ones on Tuesday (a small shipment — I learned my lesson last time) from Old Time Candy. They’re still pretty horrible, but not as vile as Fizzies Mark II were.

I can understand the many attempts to get Fizzies right. A portable way to create instant soda pop is somehow an extremely compelling idea. Unfortunately it seems that the presence of sodium bicarbonate in the recipe dooms it, flavor-wise; there’s no doubt you’re drinking flavored Alka-Seltzer. It may be that in order to really succeed, a Fizzies Mark IV tablet using real sugar might be called for, even if it is the size of a hockey puck (see below).

I regret I can’t recommend the new Fizzies, but I do recommend Old Time Candy, which has a wide selection of vintage candy from yesteryear, and good customer service.

Here is the e-mail message from 2003 in which I invited my co-workers to sample my surplus inventory of second-generation Fizzies.

Live the legacy. Come get your very own piece of confection history from the 50’s and 60’s, briefly revived in the 90’s, now no longer available except from eBay and my desk.

I myself am just barely old enough to have some dim, fond memories of Fizzies from very early childhood, but be warned: after ordering a quantity of new improved Fizzies in a variety of flavors a few years ago, I tried one but couldn’t bring myself to try any of the other flavors, the first one was that vile.

Here’s an excerpt from the comically (and now, in retrospect, ironically) cheerful “Fizzies Story,” formerly at http://www.fizzies.com/fizstory.htm:

Fizzies were invented by Emerson Drug Company. The idea derived from scientists working with chemical formulas similar to “Bromo Seltzer” and wondering if a fun, fruit flavored drink could be developed the same way. “Wouldn’t it be grand if we could drop a tablet in a glass of water and have an instant soda pop?”

After long hard work, they finally figured out how to combine the right combinations of fruit flavoring, sweetener, citric acid and sodium bicarbonate (a substance that is much like baking soda) into a magical tablet that when dropped into water, turned water into an instant sparkling, effervescent fruit drink!

“Hooray,” the scientist said. “Let’s hurry and share this with others!” So in July of 1957, just in time for the hot, summer weather, Fizzies was born and appeared in various local supermarkets.

Fizzies continued to grow in the national and international markets until 1968, many times exceeding Kool-aid in sales and popularity!

But in this same year, one of the ingredients called Cyclamates, an artificial sweetener, was banned in the United States, causing hundreds of food products to be pulled from grocery shelves all across America. At that time, it was believed that products that contained this ingredient were not good for you. Once this problem arose, the scientists who had been so happy to put sparkling smiles on thousands of children’s faces, decided to voluntarily pull Fizzies from all store shelves until they were able to find a better way to sweeten them. This was important, because sugar could not be used. If Fizzies were made with real sugar, a single tablet would have to be about the size of a hockey puck!

Then one day, a group of “Baby Boomers,” who were children when Fizzies was popular and fondly remembered the fun they had with Fizzies, began a six year quest to return Fizzies to the market. Their mission? To fix the sweetener problem.

These Boomers, who had enjoyed the sparkling smiles Fizzies gave them as children, worked extra long hours for many years, but their work paid off.

Once the original formula was purchased, scientists and chemists worked around the clock until one day… HOORAY!!! The new Fizzies was developed!

On Oct. 18 1969, holding a can of Tab, I watched Health, Education and Welfare Secretary Robert Finch tell the nation that because the sweetener posed a risk of cancer it would be banned. Just a few days before, I had seen a Food and Drug Administration scientist on television holding up deformed, sickly chicks that had been injected with cyclamates. At the time I was pursuing a doctoral degree in public health and knew that no sweeteners or other food additives had ever been cited as a possible factor in cancer causation. Why all this attention for a phantom risk? Why were we banning safe, useful products under the guise of cancer prevention? I have pursued an answer to those questions ever since.

FDA scientist Jacqueline Verrett appeared on the “NBC Nightly News” with her cyclamate-injected, malformed chicks. (She did not mention that injections of salt, water or even air would probably have had the same effect.) A few days later the manufacturer of cyclamates, Abbott Laboratories, released a study showing that eight out of 240 rats fed a mixture of saccharin and cyclamates–at levels equivalent to humans ingesting 350 cans of diet soda per day–developed bladder tumors. Finch announced the ban shortly thereafter.

An editorial in the international medical journal Lancet noted that “never have so many pathologists been summoned to opine on so few lesions from so humble a species as the laboratory rat.” The journal Nature warned that “it would be all too easy for public apprehension to be raised to the pitch where a fever of vegetarian faddism drives everything but mothers’ milk from the market,” adding in another editorial that the evidence against cyclamates was “about as solid as candy floss.”

[Cyclamates inventor] Sveda’s obituaries said he was not bitter about the banning of cyclamates, but in fact he was. He claimed that the original FDA decision was based on a combination of bad science and “sugar politics” (he thought the sugar industry was behind the health charges against cyclamates). He accused the FDA of a “massive coverup of elemental blunders,” and believed that the American public was due an apology for withholding an alternative to sugar.