Skip to content
The title of yesterday’s blog post put me in mind of what I consider to be Hollywood’s two greatest readings of the word “eww.”

The first is by Nancy Cartwright as Bart Simpson in the Simpsons episode, “Homer Alone.” Bart and Lisa are consigned to the house of their aunts Patty and Selma for the weekend. Bart rummages through their closet and finds a plastic gun, which he starts pointing around the room going, “Bang! Bang!” Lisa says, “Bart! That’s a blackhead gun!” which prompts Bart to cast it aside with a pronounced, “Eww!” 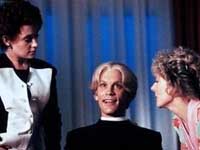 The second is by Glenne Headley as Trish in the movie Making Mr. Right (the only movie I know of with a character named Glickstein in it, which is not the only reason to check it out). “Ulysses” (John Malkovich) lies in a heap on the kitchen floor, his pants around his knees and his head torqued 180 degrees around on his neck. Trish is in hysterics as she describes to Frankie (Ann Magnuson) how she seduced and made love to him, then he spazzed out and collapsed in that unnatural state, apparently dead. Frankie breaks this news to her: “You didn’t make it with my cousin, you made it with my android.” Trish utters the most memorable “Eww!” in movie history.