Skip to content
That’s it! I’ve had it with people who say that The Godfather Part II was as good as or better than the original. 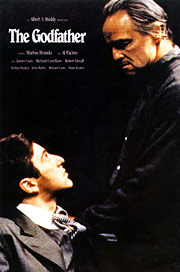 Let’s get this out of the way right now: The Godfather was a supernaturally good movie. The story, the characters, the performances, the settings, the cinematography, the editing, the music
— everything came together perfectly, as if Francis Ford Coppola made a deal with the devil.

Part II? Lots of that was great, too. Numerous memorable moments. “I know it was you, Fredo. You broke my heart. You broke my heart!” De Niro as the young Vito — incredible. But does it add up to much more than the sum of its parts like the original? No. Most of its flaws are with the plot, which is at times confusing and inconsistent. For instance, I have never been able to find anyone able to answer these questions (warning: spoilers follow):

But the biggest flaw of all was failing to bring back actor Richard Castellano to reprise his role as Clemenza. (Reportedly he demanded too much money.) Clemenza’s story was transfered to a brand-new character, Frank Pentangeli. In that story, Pentangeli, an old trusted lieutenant of the Corleone family, is fooled into believing the Corleones have betrayed him, and he betrays the Corleones in turn.

We’re told of Pentangeli’s past loyalty, but in the original film — and in the flashback sequences of Part II — we’re shown Clemenza’s. The audience has no emotional investment in Pentangeli and so the storyline does not pack the wallop it would if it were Clemenza testifying before a Senate committee. And severing ties with Clemenza, with whom Michael has a deep personal connection, would have fit much better with the overall story of Michael sacrificing his actual family for the sake of a misguided abstraction of Family.

Just wait. In a few more years someone will digitize Richard Castellano and put him into a fan-edit of The Godfather Part II. I’d pay to see that.