Shortly after I wrote my eulogy for my childhood friend Jon, I sent a printed copy to his mother, who hadn’t heard from me, nor I her, since the 1970’s. After a few weeks she responded with a lengthy letter and a portfolio of Jon’s life: photos, writings, news clippings, accolades, stories about Jon, and finally many beautiful remembrances. I am happy to report that, short though Jon’s life was, it was rich and accomplished.

Jon was the editor-in-chief of his college humor newspaper. He earned a masters degree in sociology and a degree in law. As a legal intern he represented troubled youth in court, part of a child advocacy program. At the time of his death he was working to pass the bar exam, struggling with mounting medical problems arising from both his kidney disease and from a hepatitis infection he contracted from a transfusion years earlier. He was the first recipient, posthumously, of an award created in his honor, the Jonathan Roppolo Student Achievement Award of the Suffolk County Bar Pro Bono Foundation.

The other eulogies that Jon’s mom forwarded to me from friends and family were unanimous on many points: that Jon had exceptional intelligence, integrity, humor, and compassion; that he endured his disease and the tedious routines that went along with it entirely without complaint; that he had uncommon passion and drive; and that Jon made indelible changes for the better in those who knew him, as he did me. 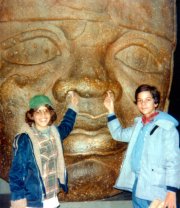 All of which makes him out to be rather a saint, which may indeed be appropriate but is also rather depersonalizing. When I knew him he was just an uncommonly fun friend, part of my inner circle. We hung out, played games, hatched schemes, acted silly.

Does it take adversity of the kind that Jon faced his whole life to make someone passionate, driven, and accomplished? Maybe. I certainly don’t have Jon’s levels of passion, drive, and accomplishment, though I do have some of each. It is very possible that what I do have simply rubbed off of him somehow, long ago.

The circle, already complete, is now illustrated.
Incidentally, that’s Amy Linker in the center of the second row.

2 thoughts on “It was a wonderful life”