Skip to content
This morning I spotted this shutterbug.com link about commercial food photography on del.icio.us’s popular page, which was my cue that it’s time to tell my Zanetti story.

In the late seventies and early eighties my dad worked as a salesman for a bookbindery. One of his clients was The Creative Black Book, a celebrated annual directory of and for professionals in creative services such as filmmaking, copywriting, photography, etc. The Black Book staff, led by founder Marty Goldstein, was young and hip, and their offices were fun to visit. My dad found plenty of reasons to pay “business calls” on this client that were really excuses to hang out and goof around. Goldstein and my dad became friends.

One of Goldstein’s friends-and-clients, in turn, was a photographer named Gerald Zanetti, who had a thriving commercial-food-photography studio in midtown Manhattan. Zanetti was also a technophile who in 1982 had one of the first small-office computers — the TRS-80 Model II — and no software to run on it.

Who you gonna call?

In 1982, Zanetti had a new computer but no way to use it, so he called me. The following year, my high-school friend Joelle bought herself a car but didn’t know how to drive, so she called me — letting me keep and use the car myself for many months in exchange for occasionally driving her places.

A tenuous connection between these two stories? Maybe. But today, Joelle’s husband runs the TRS-80 website hosting the Model II link you see in the main part of this story!

Enter yours truly. After a few years as a programming hobbyist I was ready to earn some afterschool money writing software. Through Marty Goldstein, my dad hooked me up with Gerry Zanetti and I had my first programming job.

(Holy hell, that makes this year the silver jubilee of my career.)

Zanetti loaded me up with a bunch of documentation about the Pickles and Trout version of CP/M, an operating system and programming environment that famously was almost the basis of Microsoft’s original DOS. Within a few weeks I was writing some simple office-management tools for Zanetti, but in the classic fashion of non-technical enthusiasts with money to burn, the specs for what he wanted were ever-shifting. Far from a consulting gig, my position at Zanetti’s studio became open-ended. When the school year finished I worked full-time over the summer. I became part of the Zanetti studio family, which included Zanetti, his wife, a rotating slate of assistants, and recurring visitors such as suppliers, food stylists, and other partners. My sister Suzanne did office work there on occasion too, and even I occasionally answered phones, stuffed envelopes, and ran errands.

As I toiled at the computer on a wide variety of projects — now programming, now data entry, now educating myself further in CP/M and later Xenix — all kinds of fascinating photgraphy-business stuff went on in the adjacent studio. I saw all the tricks of the trade described in the shutterbug.com article and then some: cereal arranged in a bowl of white glue, not milk; cigarette smoke blown across a cup of coffee to simulate steam; mashed potatoes for ice cream; and so on. For most jobs Zanetti used a professional home economist (a.k.a. food stylist) to prepare the food to visual perfection. I never knew a Whopper could look so good! 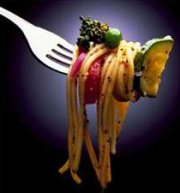 He was among the best in the business and lots of big-name clients came through the studio. Very often they purchased excessive amounts of food for the shoot and left it behind after the shoot was done. Many were the times I lugged a dozen steaks, a few hundred slices of American cheese, or a crate of Ronzoni spaghetti home on the subway.

Eventually I left New York to go to college but I continued doing bits of work for Zanetti from time to time via a character terminal and modem he supplied me with. He could never get enough of me writing software for him though he needed almost none of it, and his wife occasionally gave him a hard time about the expense of it. He was full of ideas for new computer projects, some quite ahead of their time — his blue-sky description was the first I ever heard, for instance, of an object-oriented photo-editing application.

Zanetti exhibited paternal forbearance while I learned my craft on his dime. I was exceptionally lucky to have such a willing patron and would not be where I am today without his support. Thanks, Gerry.

One thought on “Zanetti”