It happened again: I left my wallet at home and didn’t realize it until I got to work (some fifty miles away).

New Yorkers don’t say “standing in line,” they say “standing on line,” and so did I for the first half of my life. My sister Suzanne noticed the change when I started saying “in line” instead, some time after I left New York for college. She ribbed me about going native, since in Pittsburgh (as in most other places), people say “standing in line.” I explained to her the real reason I switched: to avoid confusion with the computer networking term “online,” which in the mid-80’s had not achieved any meaningful linguistic currency outside the world of computer nerds, but which was part of my everyday vocabulary at Carnegie Mellon.

I discovered it while standing in line to buy some food at a local lunch joint, just like last time. Muttering a curse, I went back to the office unfed.

…where I found aluminum catering trays full of white rice and Chinese vegetables, left over from someone’s lunch meeting. I heaped some on a plate and headed for the stairwell back to my desk. On the way there I encountered my coworker Cid, who asked me, “Do you eat meat?” “Sure,” I said, and he handed me a take-out box of leftover Szechuan chicken! Continuing to the stairwell I began trying to fetch my security badge (to open the stairwell door) while balancing the items in my hands — when my coworker Stefan saw me coming and held the door open for me.

Now it’s just after lunch. When I discovered my missing wallet I thought, “Well, at least this will help me lose a little more weight,” since my efforts in that department have plateaued — but I’m stuffed! 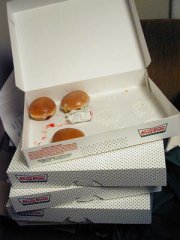 Relative weight loss is easy:
just fatten up everyone else

I just hope all this good karma doesn’t mean I’m going to get busted for driving without a license on my way home tonight. I’ll have to do something nice for my co-workers tomorrow.

One thought on “Luck o’ the Jewish”