Skip to content
We rented an old favorite from Netflix the other day: Bugsy Malone, a canonical Chicago gangland story with some great musical numbers and one big twist: no performer in the film is over the age of 12. Instead of knives, rival mobsters eliminate each other with a pie in the face. Instead of bullets, the tommy guns fire creampuffs.

After watching it, I grew curious about the kids who starred in it. Where are they now? I went to the Internet Movie Database to look them up one by one. 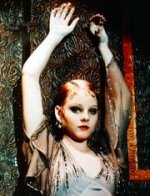 To my surprise, nearly all of the cast had zero, one, or two additional film credits after Bugsy Malone, and that’s all. Scott Baio played the title role, and he of course enjoyed a steady trickle of fame for a while in the 70’s. Other than that, no one appears to have emerged from Bugsy Malone with any sort of acting career intact…

…except for four-time Oscar nominee (and two-time winner) Jodie Foster.

Jodie Foster is a huge star. Her Bugsy Malone co-stars are shriveled husks. Coincidence — or did she have something to do with the premature depletion of their careers? Has her fame been nourished by (what should rightly have been) theirs? Some of the kids in that movie were quite good, a fact that couldn’t have escaped young Foster’s notice. Did she gorge herself on their star potential and make it her own? We report, you decide.

(Incidentally, there is a new Coca-Cola ad [I saw it in the movie theater before the very-good-but-not-as-great-as-they’re-saying Children of Men] that uses the finale from Bugsy Malone as its jingle — “You give a little love and it all comes back to you, la la la la la la la.”)