May 25th, 1977, was not an especially significant day for me. I was aware that some science fictiony thing called Star Wars had just opened, and I even saw a brief clip in the film-review segment of that evening’s news, but somehow, despite being a nerdy ten year old, the idea of seeing Star Wars held no appeal for me.

The decades of Star Wars mania that were soon to follow did such a thorough job of entombing my pre-Star Wars mentality that I can’t even construct a plausible theory to explain my disinterest, let alone remember the actual reason. A big-screen space adventure should have hit me right where I lived, and later, of course, it did, in a very big way. Could there really have been an earlier version of me that was immune to the prospect? In any event, the opening day of Star Wars came and went almost completely unremarked.

For the next many days I was subjected to my friend David‘s ravings about the film. He’d seen it on opening weekend with his dad. I regarded his lavish praise with skepticism. I knew David was also heavy into “hard SF,” to which I, a confirmed Trekkie, had not yet graduated. He had never been able to interest me in his sci-fi novelettes or his hex-grid sci-fi boardgames, which all seemed the same to me, lots of galactic-conquest-this and enslaving-races-that. 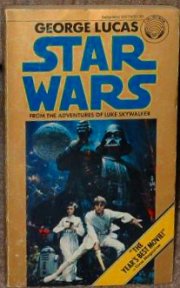 Before long, though, I could not escape the Star Wars phenomenon and decided to check out… the novel. I picked it up at the bookstore and was immediately hooked! I must have read it twice in one week and was determined to see the movie immediately. But it was too late: the summer had come and it was time to go to Monticello!

When we were in “the country” during the summer, my dad stayed in the city to work and came up to be with us on the weekends. While he was away, we were without a car. The bungalow colony where we stayed had everything we needed, so we never missed it — except that without a car, we couldn’t get to the movie theater at the Jamesway mall, where Star Wars was playing.

Each weekend that summer I pleaded with my parents to take us to see the movie, but there were always other things to do and never enough time. Meanwhile I read and re-read and re-read the book, and my parents tried to placate me with related Star Wars items like the LP of the music. Being surrounded all summer by a day camp full of kids abuzz about Star Wars, they were small comfort.

Finally, on the first Friday in August, my dad arrived from the city a little earlier than usual and announced, “Let’s go see Star Wars!” The drive from Sims Bungalow Colony to the mall could not have been more than five miles, but it seemed to take forever. Waiting for the movie to begin I fairly vibrated in my seat, possibly hyperventilating. Two hours later my parents reported, with equal measures of amusement and alarm, that they had not seen me blink once since the movie began.

I’d lost my Star Wars cherry and life was never the same. As soon as we were back in Forest Hills after the summer, I made my way to the Continental theater on Austin Street to see it again. And then again a week or two later.

By fall it was still playing, but I began to worry about the day it would disappear from the theaters. I hatched a scheme to tape-record the audio of the movie. I fit my Radio Shack cassette tape recorder inside a shoulder bag. I got fresh batteries. I got blank cassettes and took off the cellophane in advance — I didn’t want it crinkling when the time came. I put on my watch, said “Seeya tonight” to my folks, and sat through three consecutive shows of Star Wars at the Continental.

During the first show I used my watch to locate silences in the film during which I could flip or change my tape. During the second show I recorded the audio, deftly ejecting, flipping, and changing cassettes (all surreptitiously inside my shoulder bag, as I had practiced at home) at the times I’d marked down. And the third show was for — what else? — just being able to sit back and enjoy the movie.

A week later I did the exact same thing in order to have two recordings. The crappier one would serve as a backup. Of course they were both crappy, but they were good enough to listen to again and again, the way most other kids listened to their favorite records. In no time I had memorized every word, every note of music, and every sound effect. Where other kids would go around singing their favorite songs, I would recite Star Wars.

I must have driven my family and friends to distraction, but they were all very tolerant, even supportive — surprisingly so, in retrospect. I was not quite as bad as the character in Diner who compulsively quotes The Sweet Smell of Success to anyone and everyone rather than actually talk to them. But I was close. Fortunately I was still a few years away from trying to get laid.

Thirty years later I still remember the movie with near-perfect fidelity. When I read about Edward Copeland’s Star Wars blog-a-thon to commemorate the film’s 30th anniversary, I asked myself, “What can I contribute that’s more than just another reminiscence of the first time I saw Star Wars? What’s left to say that I haven’t already said?”

Then I saw Charles Ross’s One Man Star Wars show and thought, “I can do better!” That gave me my answer; and here it is. I whipped it together in a few hours with Audacity, Transcode, and a very cheap microphone. I apologize for the terrible “tape hiss” and the strange audio artifacts. I’m no sound engineer — and as this makes clear, I’m no voice actor either. I have a new appreciation for what Charles Ross does on stage — though I do think I nailed Mark Hamill’s reading of, “Are you kidding? At the rate they’re gaining?” And all of Chewbacca’s lines.

Update: I just found this online: the General Cinema feature-presentation “snipe,” which preceded my first viewing of Star Wars at the Monticello Twin Cinema. As far as I know, I only saw this “snipe” that one time, but its jazzy tune was seared into my memory and I’ve been humming it from time to time ever since. God, I love the Internet.

Update 2: The YouTube copy of the General Cinema snipe is gone but can still be found here.