Skip to content
Jonah has been doing a great job learning to read, but until now we haven’t spent much time on writing. He can write his name and a few other words (suitable for use in birthday cards), and recently, in conjunction with his beginning kindergarten, we’ve started encouraging general-purpose word-writing.

This morning at breakfast at the Bayside Cafe, Jonah and Archer got the usual kids’ placemats with crayons. After coloring the picture on the front of his placemat, Jonah flipped it over and started doodling on the back. We asked him to write a word. At random he wrote the letter B, then, trying to think of what begins with B, finished the word BEE. We gave a little cheer and I drew a picture of a bee next to his word. “Any word you write,” I told him, “I’ll draw a picture of it.”

We asked him to write another word. At random he wrote the letter P. Casting about for a word that starts with P, he shouted, “Pee!” (By analogy with “Bee,” I suppose.) Then, more jubilantly, “Penis!”

Carefully sounding it out, Jonah wrote the word on his placemat, and then started chanting, “Penis! Penis!” before we shushed him.

(Fortunately, the family seated at the next table was sympathetic, having twin boys who were Jonah’s age. Amazingly, the mom of that family recognized us when we came in: back in the ’90’s, long before kids, she and her dogs frequented the same local dog park as Andrea and I did with Alex.)

Jonah held me to my word and bade me draw a penis peeing. Here are his words, his doodles, and my dubious artwork. (The bee that I drew is obscured by later scribbles.) 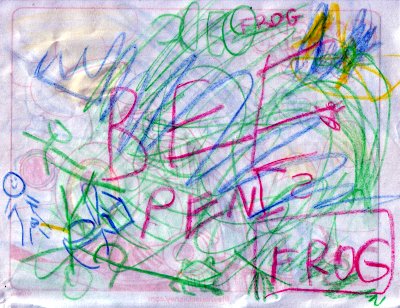