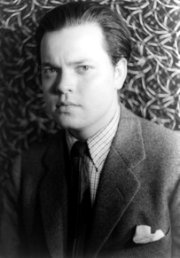 Recently I came across this photo online of a young Orson Welles and immediately saw (a broodier, better-dressed version of) myself.

It’s not that I’ve ever identified with the guy; certainly not with the suicidal, scorched-earth attitude with which he went after William Randolph Hearst, who promptly and predictably squashed his career like a bug. And I’m on record as saying that Citizen Kane, while clearly an important and innovative landmark in filmmaking, doesn’t hold up as well as its perennial “best movie ever made” accolades would have you believe. (As all right-thinking people know, the real best movie ever made, the one that does hold up well decade after decade, is The Godfather.)

No, I just saw a striking physical resemblance. At once I mailed this photo to family and friends. “Don’t you think this looks like me?” I wrote.

Everyone thought I was crazy. No one thought it looked remotely like me.

One thought on “The guy from the old wine commercials”