Skip to content
I learned of Jef Poskanzer when I became immersed in the then-small worlds of Usenet and free software in the late 1980’s. He was a Usenet celebrity and the author of the ubiquitous PBMPLUS package, among other things. PBMPLUS, and its successor NETPBM, were the standard for batch-mode image processing tools in the stone-knives-and-bearskins days of computer graphics.

So I was pleasantly surprised when I moved from Pittsburgh to California in 1992 that one of my new coworkers in the tiny e-mail startup I was joining would be none other than Jef Poskanzer! As it turned out, we overlapped at Z-Code only for a short time, but we kept in loose contact for a long time thereafter. 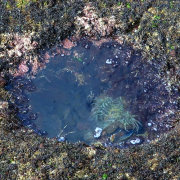 Fast forward to several months ago. One Sunday morning my wife woke up wanting to take the kids to see the sea life in tide pools at a local beach. She asked me to determine when low tide would be that day. I googled “bay area” and “tides” — and damn me if a site run by Jef didn’t appear at the top of the search results!

Now fast forward to yesterday. I followed a link from a recent blog post by SF Chronicle sex writer Violet Blue to a silly picture of herself on Flickr. And who should have added a Flickr “note” to the image but Jef Poskanzer!

In the 80’s, it took only a modest amount of such sprinkling of one’s name around the Internet to become well-known. Now it’s much less easy. In a twist on Norma Desmond, if you tell Jef, “You used to be big,” he might say, “I am big. It’s the Internet that got much, much, much bigger.”

One thought on “The Jefnet”