It occurs to me that the song Rudolph, the Red-Nosed Reindeer does not chronicle Rudolph’s response to Santa’s request, “Rudolph, with your nose so bright, won’t you guide my sleigh tonight?” It only says that after Santa asked that question, “all the reindeer loved him.” 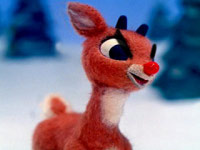 Are we to presume, after the emotional scars Rudolph received at the hands of Santa’s favored reindeer, that he’d simply acquiesce in Santa’s hour of need? Do “all the reindeer” love him merely as an Uncle Tom? Or did he earn their respect by standing up to The Man and giving Santa the “Hell no!” he deserved?

There is scant evidence to indicate which answer he gave, but I for one know which one was more likely to make the other reindeer tell Rudolph, “You’ll go down in history!”