Skip to content
My kids’ latest favorite thing is Indiana Jones. Thanks to the release of the newest movie, the attendant schoolyard chatter, and the impossible-to-avoid merchandising, Jonah’s and Archer’s zeal to see the original Raiders of the Lost Ark was stoked to a fever pitch, and ultimately we just couldn’t resist, especially considering that Raiders is awesome. After filling in the kids with a little history (about the Nazis), a little Bible lore (about the ark), and a little science (about archaeology) — and after stern warnings about fighting being lots of fun in the movies but not OK in real life — we sat down for a family viewing, and we all had a great time. 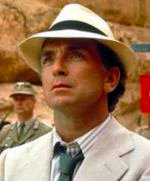 Inevitably Andrea raised the question, “Did that guy ever do anything else?” referring to Paul Freeman, the actor who turned in a memorable performance as Belloq, Indy’s Nazi-collaborating rival.

Opening a mental filing cabinet I said, “I only remember seeing him one other time, in a British TV series on PBS of all things, a year or two after Raiders. I think it had something to do with solving mysteries with science. It might have been called Q.E.D. Come to think of it, Sam Waterston might have been in it!”

When I went online to confirm this, I found that my recollection was faulty in one way: I had seen Paul Freeman two other times, including in the very funny Sherlock Holmes parody, Without a Clue, in which he played Professor Moriarty. But I was exactly right about Q.E.D. — it was a British TV series about solving mysteries with science, its few episodes aired on PBS between one and two years after Raiders, the star was Sam Waterston, and Paul Freeman was indeed in one episode. I remember being disappointed that he was nowhere near as suave as he’d been in Raiders. (But that was OK, because Sam Waterston was the main attraction. In my house growing up, we were all big fans of Waterston thanks to his droll performance in the movie Hopscotch.)

Incidentally, despite my having seen Freeman in a total of only three roles, his filmography lists nearly a hundred film and TV appearances I managed to have missed.

Now here’s a Lucky Strike extra: co-starring with Freeman in Q.E.D. was Julian Glover, who a few years later would play Indy’s other Nazi-collaborating rival, Walter Donovan, in Indiana Jones and the Last Crusade.