Skip to content
How do you like that — the same weekend that my blog turned two years old, my Google AdSense account — the little kickbacks I get every time one of you clicks on the ads that appear next to one of these posts — also passed a major milestone: I’ve earned ten dollars! At this rate I’ll be able to retire, when the time comes, on over one hundred AdSense dollars! 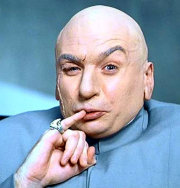 Come to think of it, that’s only if you consider my mounting AdSense balance to be an arithmetic progression. On the other hand, ten dollars is a thousandfold increase over my balance the last time I reported it almost two years ago. With just two data samples it’s impossible to tell whether the progression is arithmetic or geometric. If the latter, then my balance has been growing at better than 1% per day. At that rate, by the time I retire you will all bow before benevolent supreme dictator Bob and his 8.7 duodecillion dollars, mwa ha ha ha ha ha! Even if the dollar collapses, that oughta be worth something on eBay. Thanks, AdSense!