Skip to content
My kids saw The Clone Wars when it was in theaters earlier this summer. Mercifully I didn’t have to; they went with a friend’s family. I’d seen and heard enough to know that, if the three prequel films were so bad that they made me “retroactively dislike Star Wars” (as I have been fond of hyperbolizing), The Clone Wars was so toxic it could have put me off movies altogether.

After they saw the movie we were subjected to many days of Anakin this and Count Dooku that. The occasional four- and six-year-old Yoda impressions were pretty amusing, but the rest was hard to take.

We hadn’t realized that the theatrical release was only an extended commercial for the new TV series, and we might never have found out (we don’t have cable) except that we were staying with friends in Seattle when the show premiered and the kids got a double dose of it, goosing their fervor.

But then the situation was defused by something that I wish I could say I had planned, because in hindsight it was obvious that a new batch of adventure stories with better writing and better acting and stories that actually engage the intellect would cleanse that Clone Wars garbage from my sons’ developing minds:

We’ve watched a couple of episodes a week for the past few weeks and the kids have stopped saying “roger roger” and “young Padawan.” They are now talking about “beaming down to the planet,” “repairing the anti-matter nacelles,” and “red alert, all hands to battle stations!” It warms my heart. Here is the birthday card that Jonah made for me a few days ago. It depicts the entire family in bed, watching an episode of Star Trek. 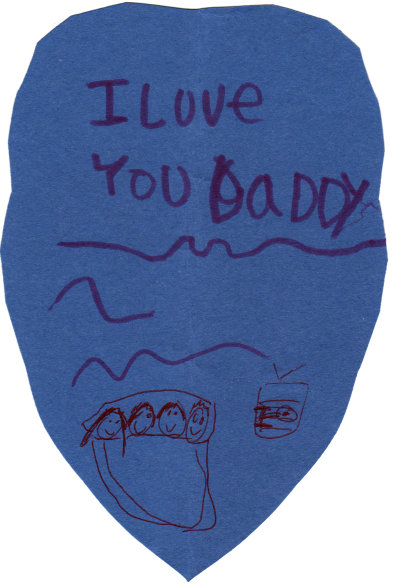 (It’s strange that he depicted an old-style aerial antenna on top of the TV. Watching all of this 1960’s programming may be affecting him in ways I hadn’t previously suspected — just like when Spock was trapped in that ice age and reverted to the primitive behavior of the Vulcans of that era!)