Skip to content
Can it really have been more than a year since my last Star Wars-related post? Well, here’s a quickie: 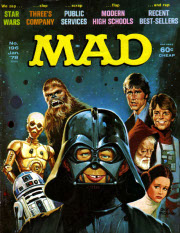