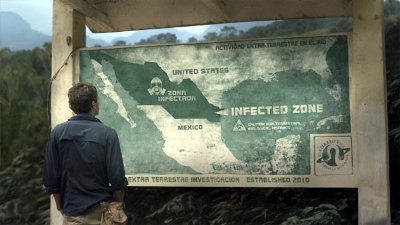 If filmmaker Edwards himself has kept mum about the agenda of his movie, I’m not surprised. Asking people to see your anti-War-on-Terror polemic is not exactly the way to pack ’em in. But that’s clearly what the film sneakily is.

In Monsters, all the Americans, other than the main characters (and one other that I’ll get to below), are soldiers. The Mexicans by contrast are peaceful civilians who, far from welcoming the “protection” provided by the Americans, resent the frequent military incursions.

At first this is peculiar. The movie begins with a terrifying fight between American forces and an alien in a Mexican city. The creature flattens its surroundings, including most of the soldiers, some civilians, and several city blocks. Mexico clearly isn’t equipped to deal with a threat like this. Why do its people not hail the American heroes?

But as the story unfolds, a pattern emerges in the behavior of the aliens. They are wildly destructive when provoked, e.g. by the hyperaggressive U.S. military. But we get to see them at a few other times, when they’re not being provoked. How do they spend that time? Playing with toys. Watching TV. Dancing with one another.

Gigantic powerful aliens along your border, capable of wild rampages, is an uncomfortable situation, to be sure. Ask yourself: in real life, would America learn the subtleties of coexisting with these new neighbors? Of course not. America doesn’t do subtlety. It would respond as the America in the film does: with overwhelming violence and without regard for sovereign boundaries. And as happened in the real Global War on Terror, the unsubtle military response in the film turns a merely bad situation into a major ongoing catastrophe.

After some harrowing scrapes, our main characters make it to the U.S. border and come face to face with the mammoth concrete ramparts that have been erected against the aliens. But as in real life, where complex security measures such as TSA airport checkpoints are actually porous and ineffective, the wall turns out to be just for show. It’s unmanned and unpowered and barely inconveniences our heroes, who are able to walk right through…

…into a disturbing vision of what America is doing to itself with its collective hysteria. Now on a dusty desert road on the American side of the wall, our heroes look for a way back to civilization. The landscape is completely deserted. After walking for a while they come upon a sweet little suburban neighborhood — whose houses are all mysteriously abandoned, and not, apparently, as a result of some clash with the aliens. After poking around nervously for a bit they finally come across a real live American walking through the empty town, an odd-looking woman, possibly homeless, pushing a shopping cart and literally wrapped in a flag. When they try to speak to her, they have a hard time getting her attention, and then all at once she lets forth with an assaultive barrage of incoherent babbling before continuing on her way.

This sequence cannot be understood other than as an illustration of the harmful effects that living on constant alert can have, ever fearful, ever paranoid, ever geared toward aggression. It has hollowed out what ought to be the American ideal — the peaceful little suburb full of family cottages, where fear has apparently driven the residents from their homes. It has turned citizens into deranged and dangerous crackpots spouting senseless gibberish, which is certainly how most of the world must regard most of us whenever we open our mouths to justify the insanity of our decade-long wars.

In the film’s final sequence, our heroes hole up in an abandoned gas station, awaiting rescue by the military, when they have their closest encounter yet with the aliens. The scene is a prescription for a better American foreign policy. The characters’ terror gives way to awe as they master their fear and come to appreciate the creatures for what they are.

The story throughout the film has been that Samantha, a wealthy heiress apparently on one last impulsive fling in Mexico, is being taken home to marry some suitable aristocrat by Andrew, a rough danger-seeking photojournalist ne’er-do-well, at the request of her father, his boss. Her future is the American dream we’re all supposed to strive for: wealth, marriage, security. Of course Andrew and Samantha fall for each other over the course of their adventure, and in the final scene, as they watch a pair of aliens drifting majestically into the distance, her final line of dialogue — “I don’t want to go home” — drives home the movie’s message: the American dream is an unhappy illusion, and we’re better off engaging with the big scary world than we are by fencing it off and fighting to keep it away.