THIS ASSET PURCHASE AGREEMENT (this “Agreement”) is made and entered into as of and shall take effect on March 1, 2015 (the “Closing Date”), by and among [company that may not wish to be named quite yet], a California corporation (“Buyer”), ZANSHIN, a California corporation (“Seller”), and Seller’s principal shareholders, BARTON SCHAEFER, STEVE WEBSTER, GREGORY FOX, and ROBERT GLICKSTEIN (collectively the “Majority Shareholders”).

Thus ends, for all intents and purposes, the story of Zanshin, the company that my friends and I started in 1996 after resigning en masse from Z-Code. It will continue to exist in name and in certain administrative functions, but [unnamed company] is buying substantially all its assets and hiring away most of its employees.

Z-Code was the producer of an award-winning cross-platform e-mail client, Z-Mail. In 1994 Z-Code’s owner Dan Heller sold the company to Network Computing Devices (NCD), a hardware company. Much of Z-Code’s staff was baffled by the sale and considered it ill-advised. Indeed there followed a corporate comedy of errors as first Dan was let go and then NCD’s top leaders, Judy Estrin and Bill Carrico, were fired. As we’d predicted, NCD’s sales staff had no idea how to sell software. As the World Wide Web started gaining traction, we were alarmed when NCD’s clueless new CEO, Ed Marinaro, tried to repurpose Z-Code’s staff of e-mail software experts as developers of a new Windows-only web browser called Mariner. Meanwhile, we were denied opportunities to make badly needed improvements to Z-Mail, and finally, after a number of grassroots efforts to turn things around had failed, a bunch of us gave up and quit to start our own e-mail software company.

After considering and rejecting several names we settled on Zanshin, a Japanese word meaning some badass combination of “emotional intensity” and “follow-through.” We discovered it in this passage in Neal Stephenson’s novel Snow Crash, describing a swordfight between avatars in the high-resolution virtual reality called the “Metaverse”:

The businessman reaches across his body with his right hand, grips the handle of his sword just below the guard, draws it out, snaps it forward so it’s pointing at Hiro, then places his left hand on the grip just below the right. […]

The businessman turns out to have a lot of zanshin. Translating this concept into English is like translating “fuckface” into Nipponese, but it might translate into “emotional intensity” in football lingo. He charges directly at Hiro, hollering at the top of his lungs. […]

“Emotional intensity” doesn’t convey the half of it, of course. It is the kind of coarse and disappointing translation that makes the dismembered bodies of samurai warriors spin in their graves. The word “zanshin” is larded down with a lot of other folderol that you have to be Nipponese to understand.

And Hiro thinks, frankly, that most of it is pseudomystical crap, on the same level as his old high school football coach exhorting his men to play at 110 percent. 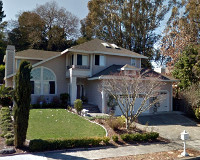 We incorporated with our own money (proceeds from selling NCD stock) and the help of a fancy Sand Hill Road lawyer. We rented a house in Petaluma where some of us lived and all of us worked on bringing to life our vision of a beautiful and functional e-mail manager built on the theory that, done right, e-mail could serve as the repository for all one’s private information and communications. In hindsight our plan was not sufficiently well-defined, and neither was our project development timeline. More than two years passed of writing code together every day, grappling with the early web and our ever-problematic dialup Internet access, pushing the boundaries of the IMAP e-mail protocol and the fledgling GNU C++ compiler, and taking turns cooking for one another, watching The Simpsons together, and generally not operating with an adequate sense of purpose or urgency. By the time our e-mail client, code-named Lawndart, finally began sparking to life, the entire e-mail landscape had changed beneath our feet. Free clients like Outlook Express and Eudora had become ubiquitous and were good enough for most people, and free web-based mail from Microsoft and Yahoo was starting to take off. Even if we had gotten Lawndart to market, no one would have cared.

The only software we ever released was a Lisp-like text-markup language called Latte (“Language for Transforming Text”) and its followup, Blatte (“Better Language for Transforming Text”), which we open-sourced and gave away as a kind of corporate calling card. Somehow or other this led to Zanshin getting an extended consulting gig with Amazon.com, for which a couple of us ended up traveling back and forth to Seattle a lot. Things I remember from that time:

but I’m damned if I can remember the nature of any actual work we did for them. Nevertheless, the gig went so well that Amazon offered to relocate us all to Seattle and hire us. Andrea flew up to Seattle to get the vibe of the place. Together we decided it was definitely doable.

Back in California we had a few long talks about Zanshin’s prospects and how we all felt about packing it in and moving to Seattle. Some of us were in favor, some were opposed and felt that Zanshin had some life left in it. We recognized that our dream of a high-tech e-mail client was dead; but in those long-overdue discussions we started to conceive of some exciting new ideas for the server side of e-mail and, in the end, convinced ourselves to stick it out as a software startup. We turned Amazon down.

We began describing to ourselves, and then to some business consultants, a collection of server-side e-mail features that collectively we called “MSpace.” Zanshin moved out of rented houses and into actual offices, and we took a little extra investment to keep us going (including from the notorious Gary Kremen, owner of the sex.com domain).

One way and another, our plans for MSpace took a detour into the realm of e-mail marketing — spamming, essentially, but ethical spamming as we were always quick to point out, for reputable marketers only, never sharing e-mail lists, and always providing no-hassle opt-out. I wrote a high-performance e-mail delivery engine and the aforementioned Blatte language for creating dynamic customizable templates, and Zanshin, operating its e-mail marketing service under the name iPost, finally started earning money.

This whole time I had been moonlighting as a founding member of the Internet Movie Database. In 1998 Amazon.com bought the IMDb (a coincidence not related to Zanshin’s consulting gig) and early in 2001 they asked me to join full-time. Five years of earning first no salary and later only a token amount had taken its toll, particularly since Andrea and I were planning to start a family; and the e-mail marketing business, though it was taking off, failed to move me. After consulting with my partners we agreed that I’d wrap up work on iPost’s delivery engine and then be done.

However, Andrea had joined Zanshin a couple of years earlier herself and she remained even as I went on to work full-time for the IMDb, and later for other companies. The e-mail marketing business amassed a surprisingly healthy client list and collected enough revenue to pay competitive salaries to a growing staff of developers and salespeople. I returned for a couple of short contract gigs from time to time. But as the years passed, the margins got slimmer and slimmer and the industry consolidated behind a few ever-larger players. Two of the other original founders had also left. New-product ideas always came second to dealing with never-ending customer issues. There was still momentum in the business, but it was unclear for how much longer. The time for a change had come, and I am grateful to Andrea and my Zanshin partners for making it happen.

Postscript. The title of this post comes from an episode at Z-Code. When a magazine, in its review of our product, Z-Mail, called our company a fledgling startup, we bristled, having by then grown quite a bit and able to count companies like Chevron and Silicon Graphics among our business partners. I undertook to make a sign for the office reading, “Z-Code Software: We’re Not Fledgling,” and it became a frequently heard catchphrase.