Skip to content
The BBC has recognized outspoken atheist Richard Dawkins as their 2006 Person of the Year. That made me think of the original Star Trek.

When writing about the appeal of the original Star Trek it has become de rigeur to cite its optimistic vision for the future — in which war, racial strife, etc. have been overcome — especially since it appeared during the turbulence of the 1960’s. But I think the real answer is something deeper and more essential.

First, a digression. In The Adventures of Baron Munchausen, the Baron, that lovable spinner of fantastical tall tales, is opposed by “The Right Ordinary Horatio Jackson,” a literal-minded and distinctly unlovable bureaucrat who prizes order and rationality over the creative chaos of the Baron’s world. The film depicts rationality robbing the world of adventure and romance.

American pop culture has always been hard on men of reason, who usually come off as amoral, insensitive, clumsy, narrow-minded, unpoetic, socially inept, or downright mad. Dreamers, lovers, men of action — they are the heroes, and anyone employing logic is a mere detractor if not an out-and-out villain.

In the popular imagination, the intellect is suspect. Thinkers in general, and scientists in particular, are a haughty elite, the priests and guardians of an occult sect with its own impenetrable apocrypha and incomprehensible dialects. They set themselves up as authorities on various subjects and make pronouncements based on arcane knowledge that are never to be trusted, because there’s always a contradictory pronouncement just around the corner.

But in reality, what can be more democratic than science? It’s the ultimate leveler; anyone can be an authority. Science isn’t a particular collection of knowledge or a particular place or particular people. Science is a method, famously encapsulated by Richard Feynman as: “1. Make a guess. 2. See if you’re wrong.” Anyone who thinks according to these rules, and follows fearlessly where the reasoning leads, is a scientist.

If democracy is the founding principle of America, science and rationality are its true religion. They are the bedrock on which its political and industrial institutions are built, even at times when science seems temporarily discredited by the prevailing political fashions of the day.

Yet, even as science is central to the American experience, it gets short shrift in popular culture. Often marginalized, occasionally trashed, seldom if ever was it celebrated properly — until Star Trek. The accomplishment of Star Trek, and the true source of its enduring appeal, was its portrayal of a future in which rationality does not kill adventure and romance but creates them, satisfying the unmet need of Americans to see their society validated — or, as one like-minded fan commented recently,

It isn’t Star Trek’s “optimism” that made it great. It’s the idea that in the future the Carl Sagans of the universe will be in charge and successfully run society on the principles of secular humanism and science while the George Bush and Dick Cheneys of the universe are Klingons. Star Trek is about the promise of a new Enlightenment […]

As a champion of romantic rationality and a lifelong Star Trek fan I am encouraged by the selection of Dawkins as BBC’s Person of the Year. Atheism has always been the belief-that-dares-not-speak-its-name. Even at the height of the Age of Reason, Thomas Jefferson, whom we might recognize as an atheist, called himself a Deist. But this news about Dawkins, and other harbingers (here, here, and here), suggest that atheism is coming out of the closet in a big way, which can only happen in an environment favorable to rationality. Can it be that the recent wave of anti-intellectualism in the Western world finally crested, crashed on the jagged rocks of the reality-based community, and is now receding?

That would be good news for the back-to-its-roots Star Trek movie now in development.

Let’s see if I’ve got this straight. God: 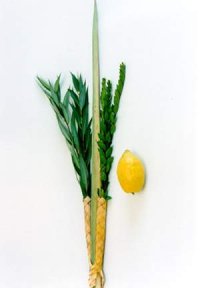 Outside the supermarket, a Chabad Jew stood in his recognizable black suit and fedora with a lulav (a bundle of branches) and an etrog (citron). As I passed to enter the store he asked if I’m Jewish.

At any other time I probably would have brushed him off with a wave of my hand and a mumbled apology. But in the past few days I’ve traded e-mail with Sarah reminiscing about (a) my bar mitzvah and (b) the time in 1980 when she convinced her mom to let her skip school (in order to accompany me to the premiere of The Empire Strikes Back) on the grounds that it was the Jewish holiday Shavuot. (Sarah is Irish.)

So I stopped and told the Chabad guy, “Yes.” He reminded me it’s now the last day of Sukkot and asked whether I’d “waved the lulav” yet.

Now, around the time of my bar mitzvah I was very involved with my religion, in large part because of the mentoring and encouragement of my rabbi, Rabbi Ungar, a real mensch. But not long after my bar mitzvah he moved across the country and we got a new rabbi who was a zero in the personality department, and my interest in the religious aspects of Judaism (as opposed to the cultural) waned.

At any rate, even with my long-ago immersion in Judaism I had no recollection of what it meant to “wave the lulav.” I accepted the man’s invitation to step inside a makeshift sukkah where I donned a yarmulke, took hold of the lulav and etrog, repeated some blessings in Hebrew at his prompting, and waved the items right, left, foward, backward, and up and down (signifying God is everywhere). It felt good to perform the ritual.

He asked whether I had a place to go for Simchat Torah, the joyous holiday that begins tonight when Sukkot ends. I declined his invitation to visit the local Chabad temple, since I live pretty far from Palo Alto, but when he urged me to find someplace near home to celebrate with other Jews I told him I would, and I meant it.

That feeling lasted for about a minute after I thanked him and entered the store to forage for lunch. I realized that I had again fallen under the spell of tribalism, the powerful emotion that comes from being in a group where you feel like you belong (and where, crucially, there are others who don’t). This emotion — which is what makes cults, gangs, and wars work, among other things — blows right past the intellect and latches firmly onto the hindbrain, where only deeply ingrained habits of rational thought can dislodge it.

During my visit to Israel in the 1990’s for the wedding of my friend Chuck, I was in the grip of tribalism for almost a whole week. No matter that I was in a very strange, very foreign place; the sensation of belonging was all-consuming. (It was that same warm feeling that got me out of bed on Saturday mornings to attend Shabbat services when I was 12 and 13.) I was certain I wanted nothing more to do with America and wanted instead to live in Israel. I talked this over with other American expatriates I met there, trying out different theories of what was making me feel that way: America’s short history vs. Israel’s long one (counting more than just the modern state of Israel, of course)? The sense of pioneering a young nation that pervades Israeli society? The stated need of a nation of my fellows for young people with skills like mine?

Ah, but what makes them my fellows — a slightly closer genetic relationship than I have to most other people? A bit more common heritage? Why do those things matter? It doesn’t mean that any particular Israeli is more or less likely than any particular American, German, Russian, or Thai to be a jerk I’d rather avoid, or to be someone I’d like to pal around with. In fact doesn’t it enrich me more to surround myself with people who are less like me than more like me?

The interminable flight back across the Atlantic cured me of the tribal feeling. I resented that it was able to hijack my brain for the duration of my trip. By the time the plane touched down in New York City — the melting pot — I remembered why I prefer being an American: I am uncomfortable ruling anyone out of belonging to my group. I am diminished if I divide the world into “us” and “them.”

Obviously I am still vulnerable to feelings of tribalism despite being suspicious of them, and that only makes me more suspicious of them. Because when my rational mind is in control, I prefer the philosophy described by Thomas Paine: “My country is the world and my religion is to do good.”