Finally he tosses in two whole eggs, breaking them open with a fork and stirring them into the coffee grounds, shells and all.

I always thought that the eggs were a bizarre little comic button on the coffee-making sequence. He stirs whole eggs into coffee grounds, haha, the weirdo! But as I learned just recently, this is in fact a common practice in some places.

What’s more, this is often referred to as “Swedish coffee,” and Burt Lancaster’s character in The Killers is “Swede Anderson.” I get it now!

I’m fifty-one, and I’ve read A Visit From St. Nicholas nearly every Christmas Eve my whole life. But it’s only this year that I finally realized that “his droll little mouth was drawn up like a bow” refers to a smile, because that’s the shape of an archer’s bow, and does not refer to some sort of concentration pucker, looking like a bow you wrap gifts with. (Previously.)

Seven years ago I wrote about belatedly getting the joke behind “born lever-puller,” Gnip Gnop, and “Fargo North, Decoder.” I wrote:

Can’t help wondering what long-overdue realization is next…

I now have an answer. Just a couple of days ago I finally “got” the name of Keebler’s E.L. Fudge cookies. 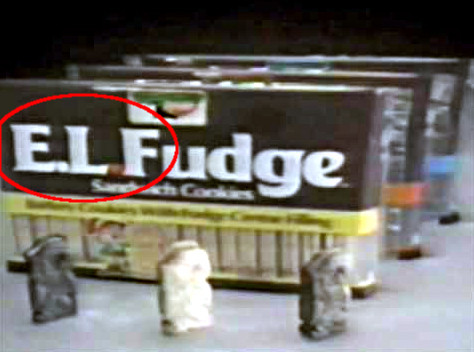 Ringo: Hey, I wonder what’ll happen if I pull this lever?
Old Fred: Oh, you mustn’t do that, now.
Ringo: Can’t help it, I’m a born lever-puller.

This quote comes near the beginning of Yellow Submarine, which I have seen dozens of times since age eight or so. I’ve been a Beatles fan for about as long.

Ringo pronounces lever with a long “e” (rhymes with Tom Seaver). It only just now occurred to me that this is a pun: Ringo is a born Liverpool-er.

This breaks my previous record of not realizing for about twenty years (mid-70’s to mid-90’s) that Gnip Gnop was Ping Pong spelled backwards — which in turn displaced ten or so years of not getting the gag behind Fargo North, Decoder.

Can’t help wondering what long-overdue realization is next…