Skip to content
In my freshman year of college there was just one tiny TV in my dorm. I don’t remember whose room it was in, but one night I was in that room with my stoner friends George and Merle. I’d had a couple of tokes myself and was feeling mellow. We longed to find something to watch on TV so we started flipping channels. I think we thought it would be a goof to find a kid’s cartoon or some other innocent program to view while high.

Our channel flipping halted by unanimous acclamation on something wholly different (and much better suited for our altered state): a riveting closeup of a rocket lifting off in extreme slow motion. Chunks of ice fell from the rocket body as slowly as snowflakes. Panel seams flexed and vibrated. It went on forever, the enormous main stage inching upward out of the frame. Then the rocket nozzles came into view, and even as drastically slowed down as the footage was, the flaming rocket exhaust that shot from those nozzles was still too fast for the eye to follow. Other equally miraculous scenes followed, one after another. 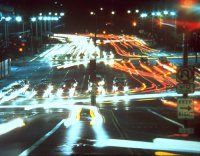 As we learned when a pledge break interrupted our spellbound trance an hour later, we had happened upon a PBS airing of Koyaanisqatsi, a movie consisting of nothing but breathtaking cinematography and a hypnotic Philip Glass score. It provocatively juxtaposes scenes of unspoiled nature against scenes of human society and technology, variously speeding things up or (as in the case of the rocket launch) slowing them down. Its title comes from the Hopi language and means “crazy life” and “life out of balance” (among other similar meanings).

It instantly joined the ranks of my favorite movies. A couple of years after this encounter, the repertory movie theater near my college (the late, lamented Pittsburgh Playhouse, not to be confused with the performing arts theater that now uses that name) serendipitously scheduled Koyaanisqatsi for my birthday, and I led a large contingent of friends across town for a viewing. When the Philip Glass choir sings “baah, baah, baah, baah” in the “Pruitt Igoe” section of the film, we sang, “Bob, Bob, Bob, Bob!”

A couple of years after that, Andrea was at my apartment and we watched Koyaanisqatsi on video. It was the first movie we ever saw together. “And today, that woman is my wife.”

Fast-forward to 1999, the year of money. We learn that a release to DVD of Koyaanisqatsi is being held up by some legal entanglements, and that the film’s director, Godfrey Reggio, is trying to raise the funds to rescue it from ownership limbo. We think nothing of sending a $150 contribution, and in return we get a precious artifact: a private edition DVD of Koyaanisqatsi signed by the director.

Three years later, our son Jonah was born. We plan a big trip east to visit both families to coincide with my birthday and Jonah’s first “half-birthday.” Shortly before leaving California we receive an invitation (thanks to our contribution years earlier) to attend a private preview screening of Reggio’s final “Qatsi” film, Naqoyqatsi (which followed Koyaanisqatsi and Powaqqatsi) — in Manhattan, where we’re already planning to go — on October 9th, when we’re already planning to be there — on the Upper West Side, one block away from the apartment of my sister Suzanne’s friend, where she and the friend can babysit Jonah while we attend the screening and the gala reception afterward. Amazed by the way things work out, we attended both. 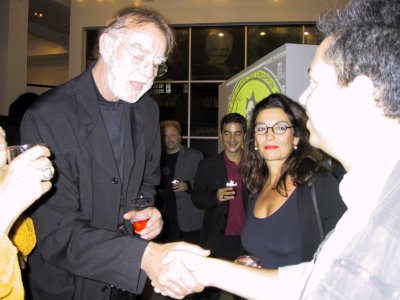 A culmination: I shake the hand of Godfrey Reggio

Naqoyqatsi was nothing to write home about. (Neither was Powaqatsi, except for the interesting trivia that Philip Glass ripped off some of his own music from that film to reuse in The Truman Show.) And the reception, while visually interesting — a lot of stark white decoration punctuated by hundreds of bright red glasses of Campari — was full of strivers and hangers-on, not the kind of scene that interested two exhausted new parents very much. But the walk to and from the reception, through West Side streets at nighttime, was magical, our first serene alone-together time after months of crazy life.

One thought on “Crazy life”