Skip to content
The single-cell parasite Toxoplasma gondii is remarkable. It can only reproduce in cats, so it has evolved the ability to control the minds of rats. That’s right, rats. When a cat poops and a rat eats it, any T. gondii that the rat ingests go to work on the little rat brain, suppressing its normal levels of caution and making it act more fearlessly — in fact the rat may specifically seek out areas that a cat has marked with its urine. This makes it easier for the rat to be caught and eaten by a cat! …Where the T. gondii can then reproduce and begin the cycle anew.

T. gondii can live in people, too; it just can’t reproduce in us. About a third of all Americans are infected with this parasite. Some weeks ago my work friend CJ highlighted in her blog some new research suggesting that T. gondii affects human personalities too, not just rodent personalities, and it does so in a gender-specific way. She writes:

Here’s what it does to men:

Now comes this item via BoingBoing:

A common cat parasite that can easily infect humans causes women to give birth to more boys than girls.

…and as I remember once reading, studies have shown that a too-high ratio of boys (in a certain age range, 15-35 I seem to recall) predisposes societies to war. 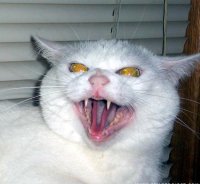 So thanks for nothing, cats. I always suspected you were the enemy, now I’m sure. Of course I can’t be certain whether that’s my own opinion or whether I’m under the control of a dog parasite from Alex.