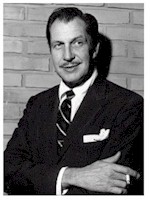 No sooner did I write my blog post, “Us and Them,” on Friday — which, though it didn’t come right out and say so, was in part a screed against prejudice — than I happened to hear a much more eloquent plea about tolerance from none other than Vincent Price.

It came at the end of a radio episode of The Adventures of The Saint circa 1950, one of several that I discovered online last week.

Few people know The Saint as anything other than the Roger Moore TV show from the 1960’s, or the forgettable Val Kilmer film from 1997. But the character was created in his first (and best) form in a series of pulp adventure stories by author Leslie Charteris starting in 1928. In high school and college I devoured every Saint story I could find. Although in later years The Saint became a more conventional kind of detective/spy character, in his first decade or so he was much more like Errol Flynn in The Adventures of Robin Hood — battling (and often profiting from) criminals, crooked politicians, evil industrialists, war profiteers, and their ilk with a unique and hugely entertaining style. (Indeed, the radio show announcer presents The Saint as “The Robin Hood of modern crime.”) You might not have thought it possible to set a swashbuckling adventure in the streets of 1930’s London, but that’s exactly what Charteris did.

Of the radio episodes I’ve heard so far, a couple are typical murder mysteries, but one (“Death of the Saint”) retains the “gay adventurer” flavor of the early Saint stories. (How I lament the loss of the old meaning of “gay.” No other word quite captures what “gay” used to mean. There’s “carefree” and “insouciant,” but those sound so, well, gay.) Vincent Price is excellent throughout, making easy work of the wordy banter that is one of the great pleasures of Saint stories; plus it’s fun to hear the mid-20th-century state of the art of what is now an all but defunct art form.

Price arranged to deliver a public-service message at the ends of some of his shows. One was on behalf of the Red Cross’s then-fledgling blood program. The following came at the end of the episode, “Author of Murder,” about a poisoning plot. Tinged though it is with nascent red-menace language, it is still relevant, and I found it particularly remarkable. It was not sponsored by any corporation nor was it government propaganda; no standards-and-practices board mandated its inclusion. It appears just to have been what was on Vincent Price’s mind at the time. Can you imagine if today’s TV stars used their shows as platforms to discuss their own civic-minded causes?

Ladies and gentlemen, poison doesn’t always come in bottles. And it isn’t always marked with the skull and crossbones of danger. Poison can take the form of words and phrases and acts: the venom of racial and religious hatred. Here in the United States, perhaps more than ever before, we must learn to recognize the poison of prejudice and to discover the antidote to its dangerous effects. Evidences of racial and religious hatred in our country place a potent weapon in the hands of our enemies, providing them with the ammunition of criticism. Moreover, group hatred menaces the entire fabric of democratic life. As for the antidote: you can fight prejudice, first by recognizing it for what it is, and second by actively accepting or rejecting people on their individual worth, and by speaking up against prejudice and for understanding. Remember, freedom and prejudice can’t exist side by side. If you choose freedom, fight prejudice.

2 thoughts on “Vincent Price in… Plea From The Saint!”