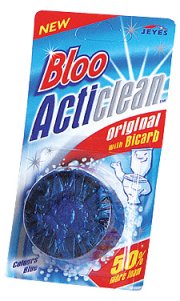 Back in the early days of playing house with Andrea, she and I were grocery shopping when, in the cleaning-supplies aisle, we encountered the toilet-cleaning tablet called “Bloo” for the first time. You drop it in the toilet tank and, for the next several weeks, it cleans the toilet and colors the water blue with every flush.

This encounter was enough for me to launch a mini-tirade on the subject of pointlessly misspelling words to achieve some sort of cutesy effect. This wasn’t a case of trying to mimic another word without running afoul of fraud laws (as with the “creme” in Twinkies or the “froot” in Froot Loops). The tablet really was blue. They could have called it “Blue” and thus avoided insulting the intelligence of toilet-cleanser consumers, but how catchy a name is the plain old word “Blue”?

Jef Poskanzer, a former colleague of mine and a celebrity of sorts from the heyday of the WELL and Usenet, once formulated “Poskanzer’s Maxim,” which has now propagated itself into conventional wisdom: “Every spelling flame contains a spelling error.” My tirade was a spelling flame of sorts, and so it contained an error of sorts. I realized it years later when I learned that “loo” is British slang for a toilet. (Amazingly you can read every Sherlock Holmes and Saint story their originators ever wrote, as I had, and still never encounter that fact.) Far from being stupid, the intentional misspelling was actually quite clever. Of course as everyone knows that’s a fine line.