“She may not look like much but she’s got it where it counts, kid.”

[Please excuse the rambling nature of this reminiscence.]

One Saturday night in 1986 I got a call from my friend Julie asking for help. She had taken the bus from CMU to the Monroeville Mall some ten miles away, had spent too much time shopping, and had missed the last bus back. Could I find some way to get her back to campus?

A taxi would have been unthinkably expensive. I knew only one person with a car: my friend Bruce. I called him to discover whether his Camaro was in working order at the moment. No luck. But he knew someone named Steve who had a car. So I gave Steve a call. I told him Bruce sent me and explained the situation, then asked: could he go rescue Julie? He couldn’t, but he was willing to let me borrow his car, which was incredibly generous considering we had never met.

I ran to his dorm room where he handed me the keys to his 1977 VW Rabbit. I thanked him profusely and found his car in the parking lot. First problem: it had a 5-speed manual transmission, whose workings I understood in theory but not in practice. (“In theory, there is no difference between theory and practice; in practice, there is.”) Second problem: it was dark, I had no light, and I could not find the ignition. Five frustrating, sweaty, cuss-filled minutes later I had the engine started and encountered problem three: I couldn’t find “reverse.”

It took several more minutes for me to figure out that in a 1977 VW, you push the shift lever down and back and right to get into reverse. All this time, Julie was waiting at the Monroeville Mall, not knowing whether help was on the way or not. (This was before ubiquitous cellphones.)

I eased the Rabbit out of the dorm parking lot and onto the street. Anticipating the stop sign a block away, I stayed in first gear, reluctant to shift. As I made my way through the streets I slowly became accustomed to the manual transmission. Much bucking and jerking later, I got onto the parkway and arrived at the mall, where I found a cold and grateful Julie waiting by the curb.

Steve and I became friends and he continued to be as generous with his car as he was that first night. I and others in our group borrowed it often. 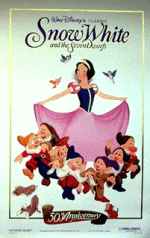 One hot summer day, Steve and I drove to New York in the Rabbit. An hour or two into the drive I began to feel feverish. By the time we neared Allentown, where we encountered bumper-to-bumper traffic, I was alternately burning up and shivering with cold. Then the car overheated and we had to pull over. We let the radiator cool, then opened it and found it empty. We had no water with which to refill it, so Steve struck off into the surrounding farmland to find some. Meanwhile, I unrolled a 50th-anniversary commemorative poster for Snow White and the Seven Dwarfs that I was bringing as a gift to my mom in New York, turned it over, and wrote in big letters on the back:

Unfortunately my only writing implement was a ballpoint pen, so though I made the letters as big as I could and gamely tried to color them in, my sign was all but illegible to the endless line of cars creeping past only a few feet away.

The effort of lettering the sign wiped me out. The sun beat down. The traffic inching by spewed heat and exhaust fumes. No one stopped to offer help. I grew delirious. Suddenly there was Steve rolling an enormous black plastic barrel full of water. He’d stolen the barrel from some farm where no one was home, and filled it from a garden hose. We poured water into the radiator and placed the barrel in the back of the car, certain we’d need it again while stuck in that standstill traffic. (And we did, but Steve considerately let me swoon in the passenger seat while he did the hard work of coaxing the car back to life.) Eventually the jam cleared up and we got back onto open road, where sustained speeds above twenty miles per hour air-cooled our engine and kept our radiator water from boiling away.

On another occasion I borrowed Steve’s Rabbit just for the sake of having some alone time, driving some of the winding roads outside of Pittsburgh. On the parkway headed back to town, the transmission popped out of fifth gear. I tried to shift back into fifth but the shift lever wouldn’t stay. So I drove for a while in fourth, then that gear failed too. Still on the parkway, I switched on my hazard lights, moved to the right-hand lane, and continued in third gear as honking cars sped by me. When I got to my exit I lost third gear. Still a mile or so from home I lost second. With two blocks left to go I lost first gear too, but by an amazing stroke of luck I was just barely able to coast the rest of the way right into a parking spot on the street in front of my apartment, where parallel parking would normally be required but (by the same stroke of luck) there were no other cars in the way.

We later learned that while I was driving, a nut had fallen out of the transmission assembly allowing fluid to drain and causing the gears to grind themselves into slag one by one.

I promised to pay Steve for a new transmission, but he didn’t get one for a long time. The Rabbit sat unused awaiting its repair. Then one night at The Balcony, while playing the dice game Cosmic Wimpout, I won from him the cost of the repair! I subsequently bought the Rabbit from him for $25 and he bought me a new transmission. I christened my new car the Plate-O-Shrimp after a quote from the movie Repo Man. My sister Suzanne ever after referred to it (more accurately, it must be said) as the “Piece-O-Shit.”

The old transmission went into the hatchback — right next to the stolen barrel of water (still kept around just in case). One night inspiration struck. I bought some rope and, under cover of darkness, hoisted the old transmission into a tree on campus, tied it securely, and left it hanging like a strange grimy piece of metal fruit. Physical Plant cut it down some time the next morning, but not before my friend David, the art student, happened to see it. Years later, he told me it was one of the most artistic things he’d ever seen. I was flattered without really understanding what was so artistic about my silly prank.

Some time not long after that, my new acquaintance Andrea professed within my earshot a desire to learn how to drive a stick shift. Naturally I offered my help and my car. We took the Plate-O-Shrimp to a big empty parking lot on campus and she drove it around under my patient tutelage. “And today that woman is my wife.”

Eventually I started making some money and was able to upgrade to a less crappy car, a 1984 Corolla named the Fine Young Chap (which also needed a new transmission as soon as I bought it, but that’s another story). The Plate-O-Shrimp ended its life ignominiously: gifted to that same friend Bruce, it remained parked on a side street in Pittsburgh for so long that the police finally towed it away, never to be seen again — but never to be forgotten.

3 thoughts on “Ode to the Plate-O-Shrimp”