Skip to content
…and when it comes to varieties of Entenmann’s cakes, never the twain shall meet. 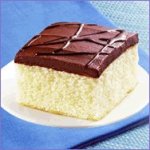 When I lived in New York (now more than half a lifetime ago, egad), my two favorite varieties were “Thick Fudge Golden Cake” and “Filled Chocolate Chip Crumb Cake.” But when I went to Pittsburgh for college, those cakes could not be found anywhere; nor (as I later discovered) are they available in California. This despite the fact that many other Entenmann’s varieties are available nationwide. 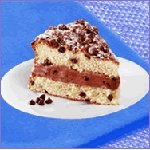 As if I have nothing better to do with my time, recently I decided to investigate. The Entenmann’s website sent me to the Entenmann’s distributor for the California region, an outfit called Bimbo’s Bakeries USA in Fort Worth, Texas. (That’s the second thing I’ve run across called Bimbo’s having nothing to do with actual bimbos, which is two more than I would have expected to find if you’d asked me.) I sent a polite and eloquent letter inquiring about the unavailability of these varieties in regions other than New York.

Sometimes, achieving a satisfactory outcome required persistence. My mom had it in abundance, as dozens of public-relations officers learned over the years to their occasional dismay. One of her favorite tricks, when on the phone with some peon who was trying to stonewall her or brush her off, was to say dismissively, “You obviously don’t have the authority. Let me talk to your supervisor.” The peon caved in to my mom’s demands nine times out of ten, just to prove her wrong.

In such ways did my mom eventually adopt the moniker “Superpest.”

When I was growing up, my mom was the undisputed champion of writing letters to companies, both to complain and to praise. In those good-old-days of corporate public relations, she almost never failed to receive both a polite, personalized reply and a handful of discount coupons for the company’s products, if not outright free samples. And very often, if the letter was a complaint, the company fixed the problem, e.g. by sending a refund.

These are no longer those good old days. The reply from Bimbo’s stated: “Those varieties are not available in your market.” Yeah, I know, that was kind of the point.

I was planning to look into the matter further, but (a) I do have better things to do with my time, and (b) Amazon.com started selling Entenmann’s products from Gristede’s in New York! So now I can get my old favorites again. Which isn’t necessarily a good thing.

Now if only I can find good Italian ices…