Skip to content
Thanks to Netflix, I saw Superman Returns a few days ago. (It was pretty good, but I had some problems with it. Maybe in another blog post.) In the story, Superman has been absent from Earth for some years; the “Returns” in the title refers to the fact that he’s back. 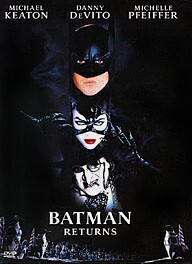 This made me think of 1992’s Batman Returns. What “returns” in that movie? Nothing; Batman hasn’t been away since the events in 1989’s Batman. On the contrary, in that title, “Returns” refers to the fact that it’s been three years for the audience since the last Batman movie. Batman “returns” to moviegoers. (Or perhaps, more cynically, Batman provides “returns” on the studio’s investment. Hard to be too cynical about the studio [Warner Brothers] and the franchise that famously required director Joel Schumacher to make Batman & Robin “more toyetic.”)

It’s an annoying case of breaking the fourth wall with the film’s title — a trend begun, ironically, with 1978’s Superman: The Movie, closely followed by Star Trek: The Motion Picture in 1979. Hey — we know they’re movies. (Or, excuse me, motion pictures, as the case may be.) Tell me what happens in the movie. Fight Club, 12 Angry Men, Run Lola Run, those are movie titles. In a movie called Superman: The Movie, I’d expect to see Superman busting film-industry crooks on a studio backlot in Tinseltown.

The Batman and Star Trek franchises continued offending with Batman Forever (which can be interpreted no other way than as the producers thumping their chests in an “I’m king of the world!” moment) and Star Trek: The Next Generation (“next” after what? after the last time you folks watched a Star Trek TV show, that’s what). I’ve always found it strange that none of the gatekeepers of pop culture ever raised aesthetic objections to badly chosen titles like these (until now, of course, if we can agree to call me “gatekeeper”), whose conflation of the real and imaginary threatens to take the viewer out of the fictional world even before they step in.

I was pleased to see that the [Superhero] Returns title template has been redeemed by having “Returns” refer to events in the story. Maybe now we can work on redeeming …The Next Generation by having the story be about the actual children of characters from a prior story. Ugh, maybe not.