We did not encourage swords in our house, I swear. (Nor did we enhance their allure by making a big deal out of prohibiting them.) But then Jonah won a plastic katana at the Marin County Fair (really, he did, all on his own, by popping balloons with thrown darts), so then of course Archer had to have one too. One thing led to another and… well, now look. 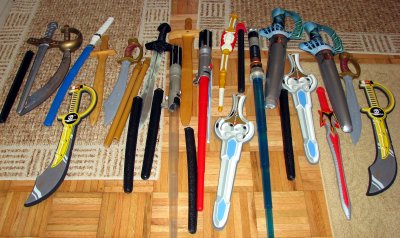 Yes, every object in that picture is used as a sword (and plenty of others, ad hoc), even the ones that don’t look like swords.

Every time we go to the supermarket (which is near the toy store), it’s:

Jonah: Can we go to the toy store?
Me: What do you want to get?
Jonah: Swords. [Archer nods vigorously in agreement.]
Me: [exasperated] Don’t you have enough swords?!
Jonah: Just one more. Pleeeeeease?

Well, at least the “just one more Thomas the Tank Engine train, pleeeeeease” phase is over. Maybe this one will end too. Meanwhile, guess what Archer’s Christmas wish list was? In its entirety, quote: