Skip to content
One of the best teachers I ever had was Mr. Arrigo, for 11th grade pre-calculus. He was young, funny, hip, and energetic. It was almost incongruous that he was a math instructor. He seemed more like the big brother who’d already gone off to college. Of course he wouldn’t be one of my best teachers if he wasn’t also excellent as a teacher, which he was.

Throughout the year we covered topics in trigonometry, complex numbers, transcendentals, and logarithms. Little did we know that Mr. Arrigo was working up to a unification of all four.

One day in class he was particularly animated. We had been discussing the Euler formula, which gives this equivalence:

or, stated just a bit differently,

When Mr. Arrigo derived this result on the blackboard, he literally jumped up and down as he exclaimed, “One simple equation relating the five most important constants in all of mathematics!” 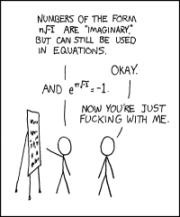 His excitement was infectious. Of course the result above is breathtaking. (If you’re not mathematically inclined, you’ll just have to take my word for it. Imagine being a world traveler collecting random antique curios from cities around the globe — then discovering one day that five of your favorite ones just happen to fit together perfectly to make an exquisite and accurate pocket watch. It’s kind of like that.) But Mr. Arrigo’s passionate presentation made it something more — an emotional highlight of my academic career.

A few years later, in college, I shared an office with my engineering friend Steve. One afternoon his actress girlfriend Amy stopped by and, one way or another, the conversation turned to mathematics. Taking turns scribbling on the whiteboard, Steve and I explained to a willing Amy how it’s possible to derive all the familiar rules of numbers and arithmetic from a tiny kernel of laws called Peano’s postulates. Amy seemed interested, so we pressed on into other topics such as geometry and its cognates, trigonometry and set theory. Thrilled that her interest didn’t flag, I mustered Mr. Arrigo’s passion and derived for her the amazing relationship between e, i, π, 1, and 0.

Soon after that, Amy’s drama-major mind finally had as much math as it could handle and our memorable pedagogical session petered out. But I could have kept going all day. I suspect Mr. Arrigo planted in me the desire to teach. I think Jonah and Archer are getting the benefit today of Mr. Arrigo’s passion way back then, and who knows? I may yet heed the urging of friends and family and become a teacher myself some day.