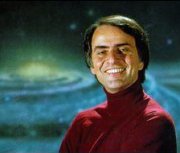 Sagan’s famous Tonight Show appearances happened right around the time I was old enough to stay up and see them. Early on I remember being annoyed by his criticisms of Star Wars (to wit: that spaceships don’t make whooshing noises in space, that Chewbacca deserved a medal at the end too, etc). But then my mom, who I think had a bit of a crush on him, urged me to read Broca’s Brain, and I was hooked on his brand of science education.

Then came Cosmos, which was eagerly anticipated in our household. We counted down to its premiere for weeks. When it finally aired, the cheesy new-age music and Sagan’s, er, limited acting abilities — the camera lingered forever on what was supposed to be his awestruck face as he sailed through the universe in his kinda lame “ship of the imagination” — left us at first unenthused. But then came his story of Eratosthenes and I got another one of those emotional learning moments that I wrote about yesterday. The following is from Cosmos, the companion book to the PBS series:

[Eratosthenes] was the director of the great library of Alexandria, where one day he read in a papyrus book that in the southern frontier outpost of Syene, near the first cataract of the Nile, at noon on June 21 vertical sticks cast no shadows. On the summer solstice, the longest day of the year, as the hours crept toward midday, the shadows of temple columns grew shorter. At noon, they were gone. A reflection of the Sun could be seen in the water at the bottom of a deep well. The Sun was directly overhead. […]

Eratosthenes asked himself how, at the same moment, a stick in Syene could cast no shadow and a stick in Alexandria, far to the north, could cast a pronounced shadow. […]

This is the right answer. Eratosthenes’ only tools were sticks, eyes, feet, and brains, plus a taste for experiment. With them he deduced the circumference of the Earth with an error of only a few percent […] He was the first person accurately to measure the size of a planet.

In the TV show, when Sagan said matter-of-factly, “This is the right answer,” I got a lump in my throat. At once I was propelled farther down the paths of learning, teaching, science, and, of course, Carl Sagan fanhood.

It is more than just a shame that Sagan died before his time of a rare disease, ten years ago today. (This blog post is participating in a Carl Sagan “blog-a-thon” to commemorate the occasion.) There is no doubt that if he were alive today, he would never have permitted science to be debased by politics to the extent that it has in recent years. Sagan knew that we ignore science at our peril and excelled at conveying that message. He saved the world once before, by popularizing the nuclear winter theory of the aftermath of even small nuclear wars, assuring those insane enough to consider such wars that they could never avoid spelling their own doom as well as their enemy’s. Who will take up his mantle and bring the Promethean fire of science back to light a world darkened by his absence?

3 thoughts on “What Carl Sagan means to me”