Skip to content
I remember the summer of 1975. I was not quite nine. Everyone was talking about Jaws. My mom forbade me to see it, asserting it would ruin forever my enjoyment of swimming at the beach (as it had hers). She was probably right, but with the pop-culture world abuzz about the film, it was impossible not to burn with desire to see it, especially when my friend Matthew, who had seen it, described in gory detail the scene where they find a disembodied human head floating in a shipwreck!

As we now know, Star Wars came along two summers later and together these two films transformed the economics of Hollywood, ushering in the era of the summer blockbuster. But in 1975 the ubiquity of Jaws was an unprecedented phenomenon. Certainly there had been big “event” movies before, but not since the Great Depression, when droves of Americans turned to glitzy musicals for much-needed escapism, had going to the movies been so central to American life.

All this came back to me as I read a news blurb recently about how, after Jaws, Alfred Hitchcock refused to meet with Steven Spielberg because Spielberg made Hitchcock “feel like such a whore.” That, and the dismay this caused Spielberg (who idolized Hitchcock), was all I saw of the blurb.

At once I understood a little better why Spielberg cast François Truffaut in Close Encounters of the Third Kind. Truffaut was not only an iconic filmmaker from the French new wave, he was also Hitchcock’s definitive biographer.

But I wondered about why Spielberg made Hitchcock feel like a whore. Did Hitchcock foresee, years before everyone else, the huge changes that Jaws was wreaking on the movie business? Did he fret about the coming rise of commerce over art? Did Spielberg’s success with Jaws somehow make Hitchcock question the motivation behind his own accomplishments? It seemed unlikely given all the changes Hitchcock had seen in the film industry over the course of his long career. Hollywood is not a place for those with hangups about artistic integrity. 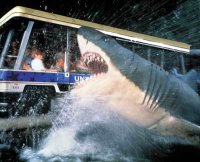 All of which was interesting enough to think about that it prompted me to begin writing this blog post, which in turn prompted me to look up the full article, which explains the less-culturally-relevant reality: that Hitchcock was a whore. He took a million dollars to be the voice of the Jaws ride on the Universal Studios tour and felt dirty about it ever after. “I can’t sit down and talk to the boy who did the fish movie,” Hitchcock once explained to actor Bruce Dern. “I couldn’t even touch his hand.”

2 thoughts on “The one that got away”