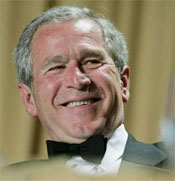 The ghosts of thousands of American soldiers butchered in an inhuman slaughterhouse do not haunt the conscience of the man who blithely sent them there. He is untroubled by the cries emanating from a dying American city, ruined and neglected on his watch. The piteous pleas uttered by the multitudes marginalized by his policies — the poor, the ill, the not-well-connected — do not perturb him. And he is completely deaf to the wailing of those foreign families he has destroyed by the tens of thousands.

Will nothing wipe the smirk off this man’s face?

“All men love justice,” and for most people other than those who have bought into Bush’s “sophistry […] by which he proves to himself that it is best to be done,” the possibility that he will not be made to answer for his crimes is frankly unbearable.

Hence the need to invent the concept of Hell. Though we have no evidence for it, we are compelled to believe in it; the world is sometimes simply too cruel to bear otherwise. Even I am occasionally reduced to muttering, upon losing some argument with a boorish authority figure or customer-service agent, “Well at least he’ll writhe in agony for eternity.” (Hell is passive-aggressive.)

There have always been evil men like Bush, and though some of them may escape judgment in this life, we satisfy ourselves that no one escapes judgment in the next. Thus too the need to invent God, the immortal, infallible, and pitiless judge, to mete out a better justice than we humans can manage. Finally, to balance Hell and cement our faith in the fundamental rightness of the universe, the concept of Heaven — the place “we” will finally go to be free of everything that has interfered with our enjoyment of this life, including “them,” the other people we have consigned to Hell.