In the summer of 2002 I was briefly, wonderfully unemployed, and a stay-at-home, first-time, brand-new dad. Of course even the happiest parent (me!) needs a break once in a while, and one day, in between feeding, burping, bathing, changing, cradling, playing with, and otherwise tending to my infant son, I read a film review that said, in part:

The best moments […] give you the peculiar joy of feeling that, for a few moments at least, you’ve escaped the laws of gravity.

You can take all the shots of rolling surf the movies have given us and not find anything like what you see here. The camera enters into the curl of waves so that the rising wall of water looks like rippling blue-green glass.

The visual beauty of the movie can be enough to make you laugh with pleasure.

The movie was shot entirely on the north shore of Oahu, and the outdoor scenes are suffused with an unusually clear light. You feel as if you could just walk up to the screen and breathe in the ocean air, or feel a fine spray of mist on your face.

all of which was exactly what the doctor ordered. So my wife gave me an afternoon off and I went to see Blue Crush. It was just as thrilling as the review led me to expect, even if its story was a conventional one about a self-doubting potential champion risking it all for the big prize. I talked it up to everyone I knew.

Oh, incidentally, the film stars a group of athletically built beauties who spend most of their screen time wearing very nearly nothing. 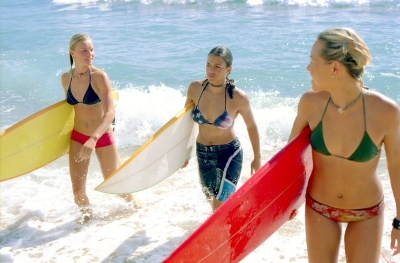 Now, not everyone to whom I enthused about the film was in the same mental space I was; they weren’t primed for a cinematic beach-vacation-by-proxy, and they hadn’t been buttered up by a rhapsodic online film review. Instead, when one or another of them finally saw Blue Crush it was, “Oh I see what you liked so much about that movie <wink>.”

It wasn’t like that at all, honest! I mean, sure, a couple of hours of tanned and vigorous young ladies in swimsuits is not exactly hard to take. But the superficial pleasures of Blue Crush are many and they are not all prurient.