As I’ve written before, there were a lot of things that bothered me about The Empire Strikes Back. But I was only thirteen when I saw it, and a diehard Star Wars fan. It took years even to admit I didn’t like it much, and decades to be able to articulate my complaints. But there was one problem with it that I was able to identify immediately in the summer of 1980: the soft, pinkish light in the cockpit of the Millennium Falcon. It hadn’t looked that way in the original, where the cockpit was shades of grey and fluorescent lighting and harsh shadows. 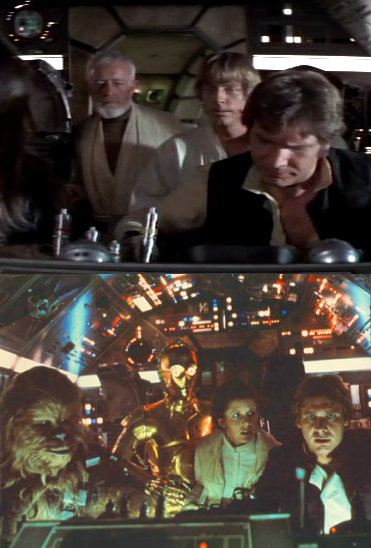 Had Han Solo had an interior decorator revamp his ship between the two films?

I wondered why the new lighting scheme bothered me so much. It could have been simply that change is painful — after all, the Millennium Falcon was already the coolest spaceship in sci-fi history, and you don’t mess with success. But I felt there must be a more substantive reason, and as I searched for it, I slowly awoke to the importance of production design, and specifically the cleverness of the color palette in the original Star Wars.

In that film, space is black, sprinkled with white stars. Spaceships are off-white and gunmetal grey. Stormtroopers, Luke Skywalker, and Princess Leia wear white. Darth Vader wears black. The surface and buildings of Tatooine are shades of beige, bleached by the sun. Inside the Death Star: grey walls and floors, grey-uniformed officers, black prison cells.

Everything is stark. There is almost no color in Star Wars — except when lasers are firing, lightsabers are clashing, and spaceships are exploding. Then what might have been only a modestly exciting action sequence is amplified, by contrast with the rest of the film’s chromatic drabness, into literally a dazzling thrill.

In 1939, when The Wizard of Oz shifted abruptly from dreary greys into Technicolor, audiences were exhilarated. Ingeniously, the art directors of Star Wars took that one tremendous sensation, chopped it up into small doses, and meted it out to their audience in electrifying little jolts throughout the entire movie — a strategy that the designers of Empire, with its more liberal and therefore less effective use of color, unwisely chose to forgo.

2 thoughts on “The colors of Star Wars”