As high school wound down for me in the spring of 1984, my class load was pretty light and I put in more time at my afterschool programming job in the Flatiron district. My occasional wanderings in that neighborhood — running errands, finding lunch, etc. — took me past several wholesale import shops, some with large storefronts displaying selected items from their stock in the window. One day as the premiere of Indiana Jones and the Temple of Doom grew near, I passed one such store and saw something that gave me an idea.

Two years earlier, my friends and I had attended a sneak-preview screening of E.T.: the Extra-Terrestrial. When the house lights came up at the end, we noted with amusement two manly men seated a couple of rows away, complete with Caterpillar trucking caps, too overcome with emotion to get up and leave the theater right away. “This is going to be huge,” we predicted. And we had an idea. 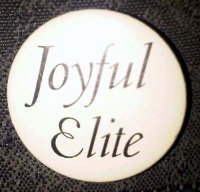 A few months before that, New York magazine published an article about our school called “The Joyful Elite” (original article). It inspired equal measures of pride and outrage: pride because it said we were some of New York City’s smartest kids, and outrage because it said we acted like we knew it. The school was in an uproar for several days because of it; and so my friends and I capitalized on that. In those pre-Zazzle days we found a novelty printing shop in the Yellow Pages (called “Abat,” which I’ll never forget because of the memorably gruff way the owner answered the phone: “’Lo, Abat”) and ordered a large batch of “Joyful Elite” buttons. When we got them a couple of days later, we carried our supply through the hallways between classes, selling them to students and faculty for two dollars apiece. They sold like hotcakes and we made hundreds of dollars! (A big deal, in high school in the 80’s.)

So when the lights came up after E.T. and we knew it was going to be a hit, we saw a profit-making opportunity. We had Abat print up a batch of “I ♥ E T” buttons and congregated outside a big midtown theater on the film’s opening day. Aware that we were crossing some sort of a line with respect to merchandise licensing, we prepared a story to tell any law-enforcement official who asked that the buttons meant, “I love Edison Tech,” our (made-up) alma mater. Fortunately no law-enforcement official ever required us to test the quality of that lie — perhaps because we sold a grand total of two buttons to exiting moviegoers. Our immediate post-mortem explanation for our failure was that everyone who sees E.T. leaves the theater too verklempt to engage in crass commercialism. On further thought, a button was not much of a way to commemorate the E.T.-viewing experience; but at that time the only tool we had was a hammer (the hammer of printing novelty buttons) and every problem looked like a nail. The excess inventory, a cartonful of “I ♥ E T” buttons, sat in my mom’s apartment for decades. If only we’d had some sort of item to sell that was more subject-matter-appropriate. 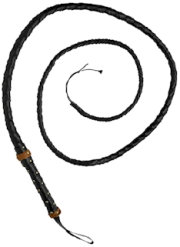 Anyway, when I passed that importer’s storefront two years later — with the opening of the first Indiana Jones sequel just a few days away — and my eyes alighted on bagsful of six-foot-long imitation-leather bullwhips for a dollar apiece, I snatched up several dozen.

I brought them with me to the premiere showing of Indiana Jones and the Temple of Doom. I arrived early enough to be near the head of a line that eventually wound from the box office of the Loews Orpheum (then on 86th Street — where I also lined up early for the premieres of Return of the Jedi the previous year and The Empire Strikes Back three years before that), down the block, and around two corners. I set a big bag of bullwhips on the ground by my feet. When my friends arrived later to hold my place in line, I made periodic forays along the ever-lengthening queue of people to sell my bullwhips for five bucks apiece, and I cleaned up. Many eager purchasers wanted to know why I wasn’t selling fedoras, too. (Answer: I’d thought of that, but they were too expensive.) A cop came and tried to shut me down but I talked him into accepting a free bullwhip instead and he left me alone.

Update: I’ll be damned, it looks like Abat still exists.