Fifteen years ago today, I got into my car, the Uffish Thought, a gold 1984 Toyota Corolla. Beside me was Alex the dog, barely three and a half years old, strapped securely into the passenger seat like Chewbacca to my Han Solo. Behind me, wedged into the hatchback and backseat, was a substantial fraction of my worldly belongings. In front of me, rigged to the center of the windshield and aimed through it via a complicated system of suction cups, S-hooks, turnbuckles, and twine, was a big 1992 videocamera borrowed from my friend Steve. We were two hours behind schedule. It was late in the afternoon. With a final kiss and a wave goodbye to Andrea, we pulled away from the curb on Beacon Street in Pittsburgh and began driving to our new home in California, six days distant. 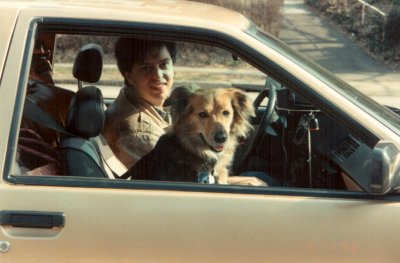 I’ll be blogging about each leg of the trip, one per day.

Our first destination was Bloomington, Indiana. It seemed slightly out of the way in my Rand McNally Road Atlas, but it was the right distance for a day’s drive and it contained my college friend “Tall” Steve Volan, whom I hadn’t seen since he belatedly finished his CMU education and left Pittsburgh for his home state.

(Tall Steve was especially dear to me for his gift, on one occasion, of the book The Eudaemonic Pie. The book was moderately interesting; it’s the true story of a team of MIT nerds in Las Vegas, using microelectronics to beat the house at roulette, back in the 70’s when that took big brains [pushing the edge of the technology envelope] and big balls [thumbing noses at the Mob]. But it was Tall Steve’s inscription inside the front cover that earned it a place in gift-giving history: Accomplish something, dammit. It is now possible to report that the inscription unquestionably has had the desired effect.)

I had called ahead to a motel in my AAA Tour Book and confirmed that they allow pets. The plan was for me to arrive in Bloomington some time in the early evening, give Tall Steve a call, and meet him to hang out somewhere.

After just a couple of hours on the road, night began to fall, and it was clear I would not be arriving by “early evening,” though when I stopped to call Tall Steve from a pay phone (and walk Alex) I had no idea just how late I would finally get there — around 10:30, as it turned out. 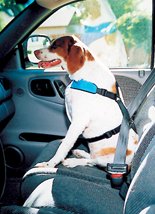 Alex was strapped into her seat with a doggie seatbelt, but was accustomed to napping in the backseat on long car rides while Andrea and I sat up front. Somewhere just past Columbus she decided to turn and leap between the bucket seats into the back, and was brought up short by the harness. She was trapped awkwardly in a tangle of straps, unable to move, and I was doing sixty on the interstate. I couldn’t stop or pull over or even do much more than glance Alex’s way, but with just a few moments of fumbling and Alex whining, I freed her by releasing her seat belt — and then just a few moments more and I belted her back into her seat, all without taking my eyes off the road. It was a tricky maneuver but I got good at it over the next few days.

When we finally arrived at the motel in Bloomington I called Tall Steve to convey my regrets. He tried to persuade me (and Alex) to come out anyway despite the late hour, but Alex was extremely excited to be in a new place and in my exhausted state I dreaded the thought of having to restrain her in any of the places we were likely to visit so late at night. I begged off and we planned to meet the next morning instead.

I set out Alex’s food and water bowls and got ready for bed. I flipped through the AAA book to find a likely next stop and a dog-friendly motel. And then I fell right to sleep… for the first of about a dozen times that night.

One thought on “A boy and his dog, part 1: Pittsburgh to Bloomington”